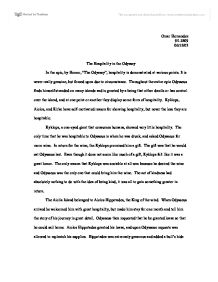 The Hospitality in the Odyssey.

Omar Hernandez 95-1809 06/15/03 The Hospitality in the Odyssey In the epic, by Homer, "The Odyssey", hospitality is demonstrated at various points. It is never really genuine, but forced upon due to circumstance. Throughout the entire epic Odysseus finds himself stranded on many islands and is greeted by a being that either dwells or has control over the island, and at one point or another they display some form of hospitality. Kyklops, Aiolos, and Kirke have self-motivated reason for showing hospitality, but never the less they are hospitable. Kyklops, a one-eyed giant that consumes humans, showed very little hospitality. The only time that he was hospitable to Odysseus is when he was drunk, and asked Odysseus for more wine. In return for the wine, the Kyklops promised him a gift. ...read more.

Hippotades was extremely generous and added a bull's hide and bottled storm winds to guide his ship to Ithaca swiftly and safely. Hippotadoes actions not out of generosity, but rather Odysseus had brought him news from Troy and entrained him with a great journey from the world beyond his island. The wind king enjoyed such things because he did not have access to them, and he felt he had to be extremely hospitable to Odysseus in order to repay him for the great gift that he had brought, which he could not receive any where else. They made the departure, but the bottle was accidentally opened, and they were forced back to the island. Hippotades turned them away telling them that the gods cursed their journey. ...read more.

In return Odysseus made her swear that if he would go to bed with her that she would not be able to harm him. Kirke transformed the pigs back into men and kept Odysseus as her mate for one year. She was fixated on a more superficial way of thinking, Kirke was only hospitable to Odysseus because of the fact that he was immune to her potion and he was man of the gods. She was attempting to improve her status and how she felt about herself. Throughout the epic there are numerous acts of hospitality, but they all derive from an alternative motive. During this time people did not have a conventional way of knowing about other lands, so they would use the new comers as newspapers in order to know what's going on. No one does anything for anyone out of the kindness of their heart. Perhaps there is no such thing as genuine acts of hospitality. ...read more.