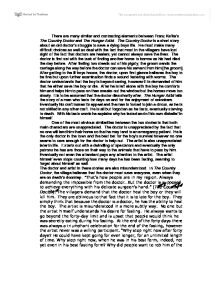 There are many similar and contrasting elements between Franz Kafka's The Country Doctor and The Hunger Artist. The Country Doctor is a short story about an old doctor's struggle to save a dying boys life. He must make many difficult choices as well as deal with the fact that most in the villagers have lost sight of the fact that doctors are healers, yet cannot always save the lives. The doctor is first set with the task of finding another horse to borrow as his had died the day before. After finding two steeds out of his pigsty, the groom sends the carriage along the way before the doctor can save his servant from him [the groom]. After getting to the ill boys house, the doctor, upon first glance believes the boy to be fine but upon further examination finds a wound festering with worms. The doctor understands that the boy is beyond saving, however it is demanded of him that he either save the boy or die. After he is left alone with the boy he comforts him and helps him to pass on then sneaks out the window but the horses move too slowly. ...read more.

but also so that he could surpass himself in some unimaginable way, for he felt there were no limits to his capacity for fasting. Why did this crowd, which pretended to admire him so much, have so little patience with him?" (The Hungry Artist). The artist was also misunderstood in the difficulty of his craft. He found fasting to be extremely easy and often tried to explain that to the people but the never seemed to believe him. "It was the easiest thing in the world. About this he did not remain silent, but people did not believe him." (The Hungry Artist). Another similarity between the two stories is the message that one should always follow what they feel to be the right thing to do. The doctor follows his duty though he knows he should have tried to save Rose. This ultimately leads to him being unable to save the boy and running for his life, naked in the freezing cold with two horses that will not lead him home. It seems that if he had done what he felt was right and saved Rose he would not be in the situation that leads to he presumed death. ...read more.

Badly paid, but I'm generous and ready to help the poor." (The Country Doctor). The doctor goes against his wants and performs his duty whereas the artist does the opposite. The artist goes against his duty of eating and providing his body with nutrients because he gives into the satisfaction he receives from not eating. He loves to fast and finds it very simple. "It was the easiest thing in the world." (The Hungry Artist). The main difference here is the choices both characters are making between duty and satisfaction. The doctor is unhappy with choosing to do his duty while the artist is very happy in his choice of satisfaction against his duty to his own body. Both of these stories seem very different upon first glance, the most obvious difference being the plot in general. However with further inspection one can find many similarities as well. Both of the main characters are underappreciated in their line of work as well as misunderstood by their peers. In conclusion though containing many differences and similarities there is one main message between The Country Doctor and The Hunger Artist and that is that one should always follow their heart and do what they feel is right. ...read more.