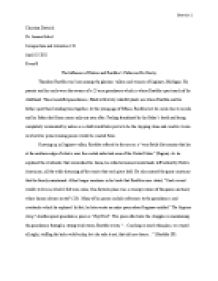 The Influence of Nature and Roethkes Father on His Poetry

﻿Dietrich Christina Dietrich Dr. Joanne Gabel Composition and Literature 131 April 13 2011 Essay B The Influence of Nature and Roethke?s Father on His Poetry Theodore Roethke was born among the glorious valleys and streams of Saginaw, Michigan. His parents and his uncle were the owners of a 25 acre greenhouse which is where Roethke spent much of his childhood. These beautiful greenhouses, filled with lively colorful plants are where Roethke and his father spent their bonding time together. At the young age of fifteen, Roethke lost his uncle due to suicide and his father died from cancer only one year after. Feeling abandoned by his father?s death and being completely surrounded by nature as a child would later prove to be the stepping stone and creative vision in which his prize winning poems would be created from. Growing up in Saginaw valley, Roethke referred to the area as a ?very fertile flat country that lies at the northern edge of what is now the central industrial area of the United States? (Pagina). ...read more.

In an article written by an unknown author, it is stated, ?By scrutinizing the plants, flowers, and creatures, Roethke attempted to tie the world of greenhouses to the inner world of man? (?Theodore Roethke?). In his poem ?Child on Top of a Greenhouse? you can sense the creative connection to his childhood. He relives a childhood journey of a simple storm that he is witnessing. This storm had him worried for the safety of the plants and greenhouses. Roethke writes, ?The wind billowing out the seat of my britches?The half-grown chrysanthemums staring up like accusers?? (Roethke 41). He continues on as he compares the trees to horses, ?A line of elms plunging and tossing like horses? (Roethke 41). Reading his poetry truly gives you an idea of how emotionally connected he was to the plants in his greenhouses. Roethke?s book of poems entitled The Greenhouse Poems, just so happened to give him his breakthrough in poetry. It was then that he realized ?the organic process of plants could stand as a metaphor for the poetic enterprise itself, each poem taking its own sensuous form and intrinsic shape? (Hirsch). ...read more.

He explains further that he was an extreme disciplinarian but in the greenhouse he showed high sensitivity to the beauty of nature. Roethke had a hard time understanding his father due to his tendency to hide his vulnerable side. It seemed as though the memory of his father?s death loomed over him for his entire life. He is said to having felt ?angered and abandoned? when his father passed away (?Contemporary Authors?). Another poem named after his father, ?Otto? held some strong words, "Who loves the small can be both saint and boor, (And some grow out of shape, their seed impure ;) The Indians loved him and the Polish poor? (Roethke 216). This poem shows Roethke?s respect towards his father. Theodore Roethke is an extremely talented poet. He has won many prizes and awards for his creative poetry and it is said that only about three percent of his writing was actually published. One can only imagine the other great poems that are in his personal notebooks. His childhood in the greenhouse environments with his father have fueled his extremely creative vision for poetry which has exuberated through the pages of his works. ...read more.