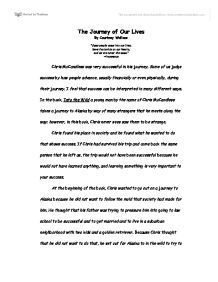 The Journey of Our Lives.

The Journey of Our Lives By Courtney Wallace "Some people come into our lives, leave footprints on our hearts, and we are never the same." -Anonymous Chris McCandless was very successful in his journey. Some of us judge success by how people advance, usually financially or even physically, during their journey. I feel that success can be interpreted in many different ways. In the book, Into the Wild a young man by the name of Chris McCandless takes a journey to Alaska by way of many strangers that he meets along the way; however, in this book, Chris never sees saw them to be strange. Chris found his place in society and he found what he wanted to do that shows success. If Chris had survived his trip and come back the same person that he left as, the trip would not have been successful because he would not have learned anything, and learning something is very important to your success. ...read more.

By hitchhiking, he had to interact with people. This shows that even though Chris wrote that he desired to get away from civilization, he still wanted to be around people. If he did not want to be around people, he would have walked all the way to Alaska. Chris' entire journey was not just catching rides and mooching off other peoples all of the time. If that were the cause that would not be a journey. At one point in his journey, he was living in a tent and working at McDonalds flipping burgers. He would come to work and bathe in the sink in the men's room. Some might ask, "So why did Christopher McCandless trade a bright future--a college education, material comfort, uncommon ability and charm--for death by starvation in an abandoned bus in the woods of Alaska," or "What longing led the twenty something McCandless to that bus and at what cost to himself and his family?" ...read more.

He realized that he could still be successful and not have to follow the mold. He found out that it was okay to be different. Some would argue that he was not happy when he died because he was starving but I believe that he was. Therefore, Chris McCandless's journey was successful because he finally found what he wanted to do and that was the whole goal of his journey and if starving to death and still being able to be happy is not Success I do not know what is. At one point in our lives we all take a McCandless journey I call it "The Journey of our lives." In his final message to the world Chris McCandless wrote," I HAVE HAD A HAPPY LIFE AND THANK THE LORD. GOODBYE AND MAY GOD BLESS ALL!" I will never forget Chris his sprit lives on forever in all of our hearts. ...read more.