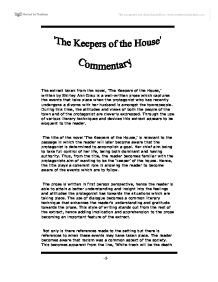 'The Keepers of the House' - Commentry.

The extract taken from the novel, 'The Keepers of the House,' written by Shirley Ann Grau is a well-written prose which captures the events that take place when the protagonist who has recently undergone a divorce with her husband is amongst the townspeople. During this time, the attitudes and views of both the people of the town and of the protagonist are cleverly expressed. Through the use of various literary techniques and devices this extract appears to be eloquent to the reader. The title of the novel 'The Keepers of the House,' is relevant to the passage in which the reader will later become aware that the protagonist is determined to accomplish a goal. Her chief aim being to take full control of her life, being both dominant and having authority. Thus, from the title, the reader becomes familiar with the protagonists aim of wanting to be the 'keeper' of the house. Hence, the title plays a coherent role in allowing the reader to become aware of the events which are to follow. ...read more.

The extract consists of more than one character each having adequate descriptions, however the chief protagonist within this extract is Abigail. Abigail has just endured a divorce with her husband, the reader becomes aware of this when she says, 'John, my ex-husband, yes.' Not only has she suffered from such a calamity, but has also lost her barn and home in a fire. Even though Abigail appears to have overcome her sorrow of her sudden marital break-up, 'the sound of that was harsh in the tinkle of laughter and voices,' it still leaves a great impact on her and the fact that she was able to say such a thing in that crowd appeared to be a courageous act of a woman who may have well been seen as an inferior character in that society. In the beginning of the extract Abigail states, 'John always wanted me to go, and I always did what he wanted...' Hence, the reader views the protagonist as one whose status is not met to that of her husbands, whose husband appears to be more superior than her, hence, ordering her to perform certain tasks. ...read more.

As the reader follows on with the extract the change in the lifestyle of the chief protagonist is clearly expressed from a woman who obeys the every command of her husband to that of woman who stands independently expressing her thoughts and insight to certain issues. Another character in which there is sufficient description is Mrs. Holloway. The reader is first introduced to this character when she confronts Abigail at the front door. Later we become aware that she is the grandmother of the chief protagonist. Mrs. Holloway appears to be those people who are always engaged in conversations even if there is no point to the specific conversation. There is a vivid description given of Mrs. Holloway as the 'smooth pink face perched atop the round shoulders and heavy breast, tightly wrapped in flowered silk.' A talkative, however sweet woman is the description the reader captures of this character. The tone of this extract is one that does not remain constant throughout the prose. However, it varies from the beginning of the extract to the end. ...read more.