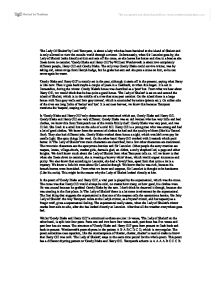 The Lady Of Shalott' by Lord Tennyson

'The Lady Of Shalott' by Lord Tennyson, is about a lady who has been banished to the island of Shalott and is only allowed to view the outside world through a mirror. Unfortunately, when Sir Lancelot goes by, the Lady of Shalott looks directly at him and sets off the curse, so she leaves her house and dies in a boat as she floats down to camelot. 'Goody Blake and Harry Gill' by William Wordsworth is about two completely different people, Harry Gill and Goody Blake. The only way Goody Blake could survive winter, was by taking old, rotten twigs from Harry's hedge, but he grabs her arm and she puts a curse on him, so he can never again be warm. 'Goody Blake and Harry Gill' is mainly set in the past, although it starts off in the present, saying what Harry is like now. Then it goes back maybe a couple of years in a flashback, to when this began. It is set in Dorsetshire, during the winter. Goody Blake's house was described as a 'poor' hut. From what we hear about Harry Gill, we would think that he has quite a good house. ...read more.

We also know that according to Lancelot, she had a 'lovely' face, apart from that quite a lot is a mystery. We know a little bit more about Sir Lancelot though. We know that he was rich, because his horse's hooves were burnished. From what we know and suppose, Sir Lancelot is thought to be handsome (Like his curls). This might be the reason why the Lady of Shalott looked directly at him. In the poem of 'Goody Blake and Harry Gill', a vital part is played by the supernatural, which was the curse. The curse was that Harry Gill would always be cold, no matter how many, or how good, his clothes were. He was cursed becuase he grabbed Goody Blake by the arm. I don't think he deserved it though, because she was stealing in the first place. In 'The Lady of Shalott' there is a lot more involvement by the supernatural. The first thing that suggests the supernatural is that one of the reapers calls the eponymous heoine, 'the fairy Lady of Shalott'. the way Tennyson refers to the Lady's mirror, as a 'crystal' mirror, and her tapestry as a 'magic web', gives a supernatural feeling. ...read more.

Wordsworth uses a few similes and metaphores as well, for example when Harry Gill is cold, a simile is used to show that Harrys teeth clattered like a 'loose casement in the wind'. Another good simile is when Wordsworth said Harry Gill had the 'voice of three'. Now the 'The Lady of Shalott' uses quite a few similes and metaphors. I like how Tennyson refers to the Lady of Shalott's tapestry as a magic web. I like the way Tennyson made Sir Lancelot, the person who unwilingly caused her death, say a prayer. One of the similes I like, is when the Lady of Shalott is going down the river in the boat, and Tennyson refers to her as being like some 'bold seer in a trance'. Out of the two poems, I prefer 'The Lady of Shalott'. Most people think the only reason I chose 'The Lady of Shalott' as the best poem, is because it is the best known of the two, but the reason I chose it is because I personaly think it is a better poem than 'Goody Blake and Harry Gill'. This is because first of all I liked the idea of the story more. I also liked the rhyme pattern more in Tennyson's poem. ...read more.