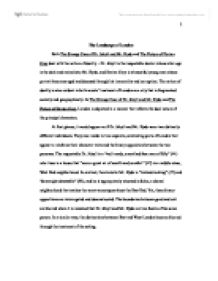 The Landscape of London

the address indicated, the fog lifted a little and showed him a dingy street, a gin palace, a low French eating house, a shop for the retail of penny numbers and twopenny salads, many ragged children huddled in the doorways, and many women of many different nationalities passing out, key in hand, to have a morning glass; and the next moment the fog settled down again upon that part, as brown as umber, and cut him off from his blackguardly surroundings. (48) The "dingy street", "gin palace", "women of many different nationalities", and the "many ragged children huddled in the doorways" are visual details that are suggestive of a slum on the East End. However, as Joyce points out, Soho is a less respectable area located in the West End (165), a shadowy space that reflects the moral ambiguity of the principal character. Moreover, Soho is the heart of the city and is surrounded by the fashionable districts of Mayfair, Pall Mall, and the Strand (Joyce 166), which is symbolic of Mr. Hyde's residence within Dr. Jekyll. Like the respectable fa�ade of Dr. Jekyll, the civilized and modern exterior of London hides a flawed and potentially dangerous inner core. ...read more.

and documented their forays into the poorer districts. While these studies may have originally been undertaken to increase public awareness about poverty, they became increasingly sensational, and served as popular forms of entertainment (Jenks 89-97). Both novels depict London as a pleasant and well-kept city as well as a dismal, gothic landscape. The treatment of the city as a dual entity reinforces the thematic duality of both novels. In The Strange Case of Dr. Jekyll and Mr. Hyde, the city is depicted in a manner that reflects the dual nature of Dr. Jekyll. Moreover, the use of descriptions that evoke fears about the degenerate poor to emphasize the otherness of the seedy neighborhood of Soho in relation to the respectable middle-class neighborhoods of the principal characters creates suspense, and subsequently horror as the differences are collapsed. In The Picture of Dorian Gray, the disturbing disconnect between Dorian's beautiful external appearance and the hideousness of his soul is matched by the stark contrasts between East and West London. Like Dr. Jekyll and Dorian Gray, London embodies a dual nature. London is a beacon of civilization, and the dazzling, cosmopolitan heart of the British Empire. Yet, it is also known for its horrible slums, and harbors a dark and sinister underworld. ...read more.