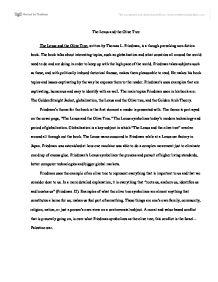 The Lexus and the Olive Tree

The Lexus and the Olive Tree The Lexus and the Olive Tree, written by Thomas L. Friedman, is a though provoking non-fiction book. The book talks about interesting topics, such as globalization and what countries all around the world need to do and are doing in order to keep up with the high pace of the world. Friedman takes subjects such as these, and with politically imbued rhetorical finesse, makes them pleasurable to read. He makes his book topics and issues captivating by the way he exposes them to the reader. Friedman's uses examples that are captivating, humorous and easy to identify with as well. The main topics Friedman uses in his book are: The Golden Straight Jacket, globalization, the Lexus and the Olive tree, and the Golden Arch Theory. Friedman's theme for the book is the first element a reader is presented with. The theme is portrayed on the cover page, "The Lexus and the Olive Tree." The Lexus symbolizes today's modern technology and period of globalization. Globalization is a key subject in which "The Lexus and the olive tree" revolve around all through out the book. The Lexus name occurred to Friedman while at a Lexus car factory in Japan. Friedman was astonished at how one machine was able to do a complex movement just to eliminate one drop of excess glue. ...read more.

Highly effective countries are in itself like a successful company. They both do not become powerful and successful by just having a good product. There are 9 important habits which Friedman talks about. If a country possesses these 9 habits then it is more likely then not guaranteed to be highly efficient. These habits should be adopted by developing countries in order to prosperously grow. The first habit that Friedman illustrates deals with how fast a country can adopt a new innovation and transform it into a commodity. There is a never ending race between countries to adopt new technology in order to stay ahead or just stay in the game. This is a lot alike Charles Darwin's theory of evolution, the survival of the fittest, just that in this case, it is the survival of the fastest. The second habit requires putting a lot of investment in knowledge and education. An example of a country that has done this is China. China has invested an enormous amount of money towards education. They are smart in doing such because, due to this investment, China is growing at a very high rate, and now plays a key role in the global markets. Countries must use the knowledge that they already have in order to become bigger and better, "companies and countries that learn to use their networks most efficiently are those that will thrive" (Friedman 221). ...read more.

may want to strip malls along every street and Taco Bells on every corner." What Zakira said is true. Due to globalization, today's technological world blurs the line of impossibility. A single man can raise an empire and if the demand is strong enough one can "strip malls along every street and Taco Bells on every corner" (Freidman 325). An example of such, is the Starbucks franchise. It is amazing how many Starbucks one can find and so close to one another. There are more then 4 Starbucks in a single mall at times! As long as it is a good product and the demand is high enough, one can fill the world with it. The Lexus and the Olive Tree is overall a marvelous book thanks to its author, Thomas L. Friedman. This book enhances and explains in a fun and interesting way how the world and its countries are globalizing. This book will change your view of the modern world, and is a type of manual for future countries or company leaders on how to efficiently and prosperously run their establishment. The Lexus and the Olive Tree does all of this and more; it grabs all the complicated terms and concepts and reformats them into simple symbols and entertaining illustrations. Friedman's book is highly recommended to anyone who wants to learn about globalization and its consequences. ...read more.