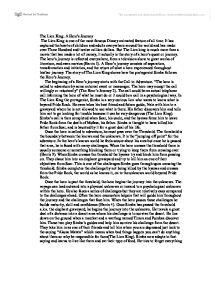 The Lion King: A Hero's Journey.

The Lion King: A Hero's Journey The Lion King is one of the most famous Disney animated feature of all time. It has captured the hearts of children and adults everywhere around the world and has made over Three Hundred and twelve million dollars. But The Lion king is much more than a movie that has made a lot of money, it actually is the story of a hero's quest or journey. The hero's journey is reflected everywhere, from a television show to great works of literature, and even movies (Harris 1). A Hero's journey consists of separation, transformation and initiation, and the return of what a hero experienced throughout his/her journey. The story of The Lion King shows how the protagonist Simba follows the Hero's Journey. The beginning of a Hero's journey starts with the Call to Adventure. "The hero is called to adventure by some external event or messenger. The hero may accept the call willingly or reluctantly" (The Hero's Journey 2). The call could be an actual telephone call informing the hero of what he must do or it could be a call in a psychological way. In The Lion King the protagonist, Simba is a very curious lion who wants to know what is beyond Pride Rock. ...read more.

the elephant graveyard, he begins the journey into the unknown. He travels a great deal of a distance into a desert area where his challenge is to survive the desert. He lies down on the ground when a meerkat and a warthog named Timon and Pumbaa discover him. These two play Simba's guides and help him survive his challenge from the desert. They take him in as one of their friends and tell him when you are depressed just look to the saying "Akuna Matata" which means when bad things happen you can't do anything about them so why be responsible for them(The Lion King). Simba now adapts to that saying and learns to live like them and eat their type of food. He tries to forget everything that has happened in the past with his father but he is still haunted by the thought that he killed him. The next part in the Hero's Journey is the Abyss. When the hero reaches the Abyss, it is the greatest challenge of the journey. The hero must surrender themselves completely to the adventure and become one with it. The hero must face his greatest fear and face it alone because the guides can only go so far (Harris 4). ...read more.

In the end Simba defeats Scar and he is killed by the hyenas because Scar blamed everything on them. Once the transformation process has occurred in the journey, next comes the time to achieve the atonement. The hero is fully "reborn" again and in a spiritual sense, the transformation has brought the hero into harmony with life and the world (Harris 5). After defeating Scar, Simba achieves his Atonement by becoming one with himself and is then reborn again into the King he was always meant to be. He is now ready to become king of Pride Rock and a hero. The final stage in the Hero's Journey is the Return. During the Return the hero goes back to his homeland and everything changes back to the way it was before. The hero is reborn again, is now happy with himself and is now a stronger, more mature person. Simba is reborn again as a new Lion King, Pride Rock is turned back to the beautiful place it was, and Simba, Nala, his guides, and his new son are standing on Pride Rock to complete the "Circle of Life" and the Return. You have now just read the process of the Hero's journey and how the story of The Lion King isn't just a movie about a Lion, it actually shows how Simba, a curious Lion transformed into a Hero thus fulfilling the Hero's Quest. ...read more.