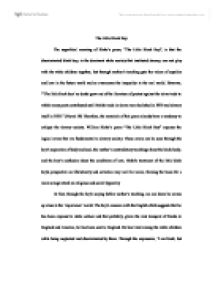 The Little Black Boy The superficial meaning of Blake's poem, "The Little Black Boy", is that the discriminated black boy, in the dominant white society that instituted slavery, can not play with the white children together, but through mother's teaching gets the vision of equality and love in the future world and so overcomes the inequality in the real world. However, "'The little black boy' no doubt grew out of the literature of protest against the slave trade to which many poets contributed until British trade in slaves was abolished in 1810 and slavery itself in 1833." (Nurmi 59) Therefore, the materials of this poem already have a tendency to critique the slavery society. William Blake's poem "The Little Black Boy" exposes the logical errors that are fundamental to slavery society. These errors can be seen through the boy's separation of body and soul, the mother's contradictory teachings about the black body, and the boy's confusion about the conditions of love. Blake's treatment of the little black boy's perspective on Christianity and salvation may well be ironic, forming the basis for a more savage attack on religious and social hypocrisy At first, through the boy's saying before mother's teaching, we can know he comes up close to the 'experience' world. ...read more.

But this is a difficult interpretation to accept. Not only does it legitimize slavery, which Blake hated, but it undervalues vision. This contradictory teaching finally makes the boy be confused. Jerome states that the effect of her teaching on her son is evident. "The boy has failed to accept his own spiritual worth and has denied his divine energies; instead, he has internalized his inferiority to the English boy, as his final vision of heavenly 'equality' ironically evinces." (Jerome 16) The mother tries to relieve the current pain of the boy simply with the vision of equal life in the future world, not in the real world. Through this, Blake stresses that they need the real vision of equal life in order to abolish the slavery. Finally, the boy believes that he can shade the weak English children because he bears the beams of God's love. However, at the last line, he finally wants to be like the English children and then get a love from them. Because of mother's contradictory teaching, he is confused that the primary condition of love is to be the white. Even if one uses the black boy's logic, one has to admit that "be like him" is still not very sound reasoning. ...read more.

Using this boy and mother's contradiction, Blake indirectly criticizes the slavery society. We can know more about the Blake's thoughts from a picture of the plate. Our expectation is that the black boy has the happy and equal life in the future world, but in the second picture of the plate, it is seen too far from the equality or love that the boy hopes and learns. The white child is welcomed by Christ but the black boy is still isolated behind the white child. This picture reveals the Blake's critical thought that the equal vision in the future world is just an illusion and weak and contemporary consolation which becomes worthless when he goes into the 'experience world.' When we wake up from the illusion and try to build the equal world like utopia right here in the real world, it is the poet's point that the dreams come true faster. In this poem, we can see that, through the mother's teaching, Blake comments that the conventional Christian doctrine contributes much in justifying the slavery. The society without oppression and extortion and filled with love and equality, this is the 'Jerusalem' that he wants to build. Because he has a dream to build utopia right here where and when he lives now not believing the future world, his poems naturally contain the innovative social criticism. ...read more.