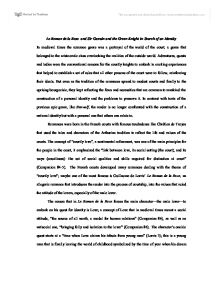 The main characters in Le Roman de la Rose and Sir Gawain and the Green Knight are capable of finding an identity that suits them; the different paths that each characters takescourtly love and chivalrywere the highest ideals in medieval times

Le Roman de la Rose and Sir Gawain and the Green Knight in Search of an Identity In medieval times the romance genre was a portrayal of the world of the court, a genre that belonged to the aristocratic class overlooking the realities of the outside world. Adventures, quests and ladies were the conventional reasons for the courtly knights to embark in exciting experiences that helped to establish a set of rules that all other persons of the court were to follow, reinforcing their ideals. But even as the tradition of the romances spread to modest courts and finally to the uprising bourgeoisie, they kept reflecting the fears and necessities that are common to mankind: the construction of a personal identity and the problems to preserve it. In contrast with texts of the previous epic genre, like Beowulf, the reader is no longer confronted with the construction of a national identity but with a personal one that others can relate to. Romances were born in the French courts with famous troubadours like Chr�tien de Troyes that used the tales and characters of the Arthurian tradition to reflect the life and values of the courts. The concept of "courtly love", a sentimental refinement, was one of the main principles for the people in the court, it emphasized the "link between love, its social setting (the court), and its ways (courtliness): the set of social qualities and skills required for distinction at court" (Companion 84-5). The French courts developed many romances dealing with the theme of "courtly love"; maybe one of the most famous is Guillaume de Lorris' Le Roman de la Rose, an allegoric romance that introduces the reader into the process of courtship, into the values that ruled the attitude of the lovers, especially of the male lover. The reason that in Le Roman de la Rose forces the main character-the male lover-to embark on his quest for identity is Love; a concept of Love that in medieval times meant a social attitude, ...read more.

knight; especially how a simple knight could symbolize the power of his king, which is why loyalty was a central quality for a knight. In previous romances dealing with the court of King Arthur, the knight Gawain "persists as the prototypical knight, [embodying] the chivalric and Arthurian ambiance" (Companion 219). He is the perfect knight in several romances that retold his adventures, and because of them he becomes a legend, he gains an identity and creates standards by which he has to live. In contrasts with Le Roman de la Rose and his theme of "courtly love", the author of Sir Gawain and the Green Knight-known as the Gawain-poet-is interested in how chivalry affects one's identity; in this case Gawain's identity is already constructed but as the poem evolves this identity will be questioned and the knight will have to reconstruct it as he learns more about him and the world that surrounds him. The beginning of the poem establishes the mythical connection between Rome and England, reaffirming their qualities of "bold men" (Sir Gawain l. 21); but since the beginning this national identity will come into question by the poet's comment of its oral source: "as I have heard" (Sir Gawain l. 26), a comment that will be repeated other times in the poem. In king Arthur's court, the praises continue; the place is full of "mighty lords" (Sir Gawain l. 38) and "gentle knights" (Sir Gawain l. 42) all waiting for their next adventure. The introduction of the Green Knight is the disruptive element for this perfect courtly world, a reminder that "the world of nature and violence" (Benson 101) is outside; he is the menacing presence that will be the cause of Gawain's quest. The Green Knight is presented in the poem to contest the allege fame of chivalry of Arthur's knight; he has been assured that they are "the most warlike [men], the worthiest the world has breed" (Sir Gawain l. ...read more.

In this same spirit, Jean de Meun's Le Roman de la Rose could be seen as an attempt to question the social codes of "courtly love" and change the ideals that Guillaume de Lorris had established; but this romance doesn't fulfill his goal in the same prolific way that Sir Gawain and the Green Knight does. The main characters in Le Roman de la Rose and Sir Gawain and the Green Knight are capable of finding an identity that suits them; the different paths that each characters takes-"courtly love" and chivalry-were the highest ideals in medieval times for any man in the world of the court. Each character becomes a role model for young men when they are confronted with their future; the tests that each character has to surpass in order to reaffirm his identity are evidence that is possible to construct an identity and keep doing it no matter the problems that arise. Because of the time difference between these romances-and maybe because of their culture of origin-each process of construction of identity is presented in different ways. Le Roman de la Rose was written early in the Middle Ages-year 1225-when these ideals were still a convention; while Sir Gawain and the Green Knight-year 1400-was written in a time when these social conventions were starting to fall apart and people were starting to questioned them. It is important to realize that both romances deal with themes that remind the reader of his humanity: love as one of the most human feelings, and the possibility of failing and learning from your mistakes. As much as these romances work to help young men to construct a solid and unify identity, the reader has to bear in mind that in order for the characters to achieve this, the poet disassociates the identity of others: the lady in Le Roman de la Rose, and Bertilak in Sir Gawain and the Green Knight. ...read more.