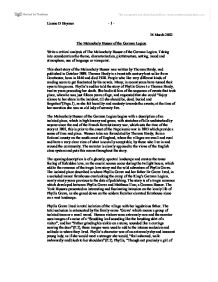 The Melancholy Hussar of the German Legion

16 March 2002 The Melancholy Hussar of the German Legion Write a critical analysis of The Melancholy Hussar of the German Legion. Taking into consideration the theme, characterisation, plot/structure, setting, mood and atmosphere, use of language or viewpoint. This short story of the Melancholy Hussar was written by Thomas Hardy, and published in October 1889. Thomas Hardy is a twentieth century best seller from Dorchester, born in 1840 and died 1928. People who like very different kinds of reading seem to get fascinated by his novels. Many, in recent years have turned their eyes to his poems. Phyllis's auditor told the story of Phyllis Grove to Thomas Hardy, twelve years preceding her death. She had told him of the sequence of events that took place, when he was just fifteen years of age, and requested that she could "Enjoy silence to her share in the incident, till she should be, dead, buried and forgotten"(Page.1), as she felt humility and modesty towards the events; at the time of her narration she was an old lady of seventy five. The Melancholy Hussar of the German Legion begins with a description of an isolated place, which is high breezy and green, with stretches of hills undisturbed by anyone since the end of the French Revolutionary war, which sets the time of the story at 1801, this is prior to the onset of the Napoleonic war in 1803 which provide a sense of time and place. ...read more.

Phyllis was willing to leave her father as she felt little love towards him, as she disliked the way he behaved towards her. Phyllis Grove found true love with a handsome, young and honourable soldier in the York Hussars. Phyllis viewed Matthaus Tina as a "Refined and well educated man"(P.5), who "Treated her with respect which she has never before been accustomed", to by her father or by Humphrey, "He showed himself to be virtuous and kind"(P.8). Matthaus suffered from "Chronic home-sickness which depressed many of the men to such an extent they could hardly attend to their drill"(P.5). Matthaus missed his mother deeply and was willing to leave the army; without discharge, to be with her. Phyllis and Matthaus were of different social classes and their marriage would never have been allowed by her father; this Phyllis had no doubts of, as when Matthaus asked her "Would your father allow you to marry a non-commissioned officer in the York Hussars?" she replied, "My father would not - certainly would not"(P.7). Matthaus was seen as a lower class as he was a foreigner, and as her father told her of the York Hussars, "Foreign barbarians, not much better than the French themselves!" which added insult to injury as the French were regarded as the lowest of the low since the French Revolutionary war; this shows a total contrast of opinions between father and daughter. ...read more.

Phyllis witnessed the execution, and for the sake of social standing has never found true love again, as she felt it was her duty to marry a man who her father approved of, and was accepted within the community. The tragic setting created is one of complete isolation and darkness, with a ghostly, gloomy atmosphere, which becomes a little light-hearted during the love scenes. There is also a tense feeling, as Phyllis fears her father discovering her. I found that Thomas Hardy is sympathetic towards the character of Phyllis Grove, as she lived her life confined to her home, almost like a prisoner. She always sought approval from her repressive father, and the community as a whole. Even though she found an opportunity of escape, she still felt the need to preserve her self-respect, and unfairly suffer in a loveless marriage, which fatefully did not take place. The author could also be sympathetic to Humphrey, as his actions were not part of his true personality but were a result of his social background. Phyllis is buried nearby Matthaus and Christoph's unmarked graves at the back of a little church; near the crucial wall of their doomed love relationship. Thomas Hardy's short story seeks a reminder, through ambivalently, of the passing of time and the death of love; but, longing to preserve the dream and the dilemmas of ninetieth century men and women. Lianne D Haymer - 1 - ...read more.