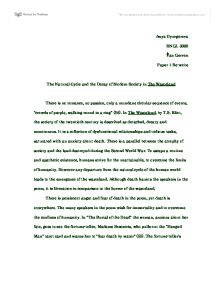 Anya Dyurgerova ENGL 3060 Van Gerven Paper 1 Re-write The Natural Cycle and the Decay of Modern Society in The Wasteland There is no romance, no passion, only a mundane circular sequence of events, "crowds of people, walking round in a ring" (56). In The Wasteland, by T.S. Eliot, the society of the twentieth century is described as detached, dreary and monotonous. It is a collection of dysfunctional relationships and tedious tasks, saturated with an anxiety about death. There is a parallel between the atrophy of society and the land destroyed during the Second World War. To escape a routine and apathetic existence, humans strive for the unattainable, to overcome the limits of humanity. However any departure from the natural cycle of the human world leads to the emergence of the wasteland. Although death haunts the speakers in the poem, it is liberation in comparison to the horror of the wasteland. There is persistent angst and fear of death in the poem, yet death is everywhere. The many speakers in the poem wish for immortality and to overcome the confines of humanity. In "The Burial of the Dead" the woman, anxious about her fate, goes to see the fortune-teller, Madame Sosostris, who pulls out the "Hanged Man" tarot card and warns her to "fear death by water" (55). The fortune-teller's words reoccur later in "Death by Water", a description of the grotesque death of "Phlebas the Phoenician." ...read more.

The other immortal character in the poem, Tiresias, is "blind, throbbing between two lives" (line 218), also alienated from the human world, not only by his immortality but also because he is a hermaphrodite. Sybil and Tiresias's separation from the sequence of life compel them to lead a miserable existence. The voices of these immortal characters portray how only once immortality is experienced can death become a salvation, a place of peace. The modern relationships that Eliot portrays are devoid of love, companionship and desire. The theme "when love fails, a wasteland develops" is recurring throughout the poem. The author constantly alludes to the legend of the Fisher King. In the legend, The Fisher King was hurt and became impotent and ill, disabling him to care for his kingdom. He was left alone to lead a meaningless life, fishing. Without his love the land deteriorated, lost its fertility and perished into the wasteland. Similarly, in the modern society, alienation from the natural world and a depletion of love leads to decay. The woman in "A Game of Chess" attempts to speak to her significant other, distressed about their relationship. She pleads with him to stay with her, to speak to her and to share his thoughts with her (111-113). He is detached, remaining silent and thinking only of death. The man has separated from humanity while the woman remains part of the cyclical existence. ...read more.

In the legend of the Holy Grail, Parsifal found the Holy Grail in the Chapel Perilous and life returned to the land. However, in the empty chapel in the poem there are only "dry bones", signifying that vitality will not return to the land like it does in the legend. Instead society continues to decay illustrated in the line "London Bridge is falling down" (427). In reality there is no Holy Grail, there is no change: "I sat upon the shore/ Fishing with the arid plain behind me" (424-425). The banal, circular sequence of human life continues. Eliot explores the themes of life, death, immortality and alienation throughout The Wasteland. These themes are examined in various historical contexts, from ancient myths to the modern society and tied together by the immortal characters, Sibyl and Tiresias. Disconnected by the varying historical context and the many narrators, T.S. Eliot's style of writing in The Wasteland mirrors the disintegrated moments that give meaning to human life. Human life is cyclical, routine and mundane with memories as the only specks of color on an otherwise gray canvas. Death is not an ending; it is only part of the cycle. Immortality, the desire to forget and deprivation of emotion and of love are unnatural and create a partition from the human world where the wasteland appears. Modern Society consists of failed relationships and hollow humans existing in the "Unreal City." Its loss of fertility and love results in the emergence of a wasteland. ...read more.