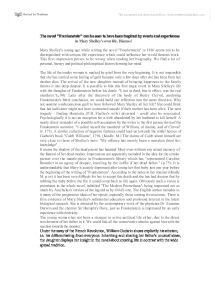 The novel &quot;Frankenstein&quot; can be seen to have been inspired by events and experiences in Mary Shelley's own life. Discuss!

The novel "Frankenstein" can be seen to have been inspired by events and experiences in Mary Shelley's own life. Discuss! Mary Shelley's young age while writing the novel "Frankenstein" in 1816 seems not to be distinguished with serious life experience which could influence her world famous work. This first impression proves to be wrong when reading her biography. We find a lot of personal, literary and political-philosophical factors forming her mind. The life of the tender woman is marked by grief from the very beginning. It is not impossible that she has carried some feeling of guilt because only a few days after she has been born her mother dies. The arrival of the new daughter instead of bringing happiness to the family throws it into deep despair. It is possible to link this first tragic event in Mary Shelley's life with the thoughts of Frankenstein before his death: "I, not in deed, but in effect, was the real murderer."(p.90). Later after the discovery of the body of Henry Clerval, analysing Frankenstein's bitter conclusion, we could build our reflection into the same direction. Why not assume a subconscious guilt to have followed Mary Shelley all her life? ...read more.

(P.54). Being well educated, Mary Shelley is probably aware enough of the real reasons for the events her hero lists. The purpose of such unjustified estimation is more likely to be the author's aim to show Frankenstein's excessive self-confidence in his own intellectual potential power and the exaggerating of the individual significance. His forename is not chosen accidentally. It is like a prediction of victory. Unfortunately we discover a hidden irony there. The insanity of his desires protrudes from the background of the looming mighty Alps in the numerous magnificent descriptions of the imposing mountain chain. It is not enough to underline the unison or contradictions between the characters' actions and the grand natural pictures. The presence of the awesome Alps in the book is not only an influence from the splendid location where the novel was conceived but also we receive the impression that the mountain has even an independent role in the narrative. The silent "actor" helps us to see clearer the contrast with the monomaniacal performance of the main hero. We understand that the might belongs only to Nature and that nobody should dare to compete with it. As such fighting takes a lot of time and effort, during the long six years Frankenstein devotes all his attention to the planned hard experiment. ...read more.

Both are obsessed by the rhythm of the poem and quote from it to describe their own condition or determination. This brings additional charm to the gripping story. Reading nearly any stanza from the "Ancient Mariner" we can envisage the fascinating power of the epic over the young writer. Its elevating sound is extremely topical just after the time of the French Revolution: * Alone, alone, all, all alone, Alone on a wide wide sea! And never a saint took pity on My soul in agony. The spread out alliteration expands the boundaries of the immeasurable ocean as ajnetaphor of freedom and independence. Similar feelings have thrilled Mary Shelley while reading "Emil" by Jean Jacques Rousseau. It encourages the ideas of Liberty, Equality, Fraternity -the stimulation for the armed insurrection and the insistence on human rights through the character of the monster. Rousseau's ideas elaborated by Godwin in his "Political Justice" are the best explanation for the transforming of the creature into a villain due to treatment by society. A lot of other writers and their books have contributed to forming the views which Mary Shelley conveyed in her riveting novel. Whatsoever is the impact on "Frankenstein" one is undoubted - the envied talent of Mary Shelley to combine all her knowledge, intuitive capacities and innate genius for developing a real masterpiece. ...read more.