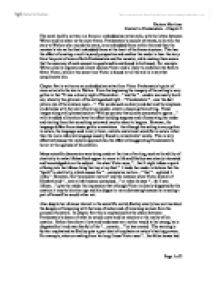 The novel itself is written in a frame or embedded narrative style, with the letters between Walton and his sister as the outer frame. Frankenstein's account of events.

The novel itself is written in a frame or embedded narrative style, with the letters between Walton and his sister as the outer frame. Frankenstein's account of events, as he tells the story to Walton who records the story, is an embedded frame within this and then the monster's tale as the final embedded frame at the heart of the frame structure. This has the effect of creating a multi-layered perspective and enables the reader to hear the story from the point of view of both Frankenstein and the monster, while making them aware that the accuracy of each account is questionable and bound to be biased. For example Walton clearly respects and almost idolizes Victor and is likely to embellish the facts to flatter Victor, while at the same time Victor is bound to tell the tale in a way that compliments him. Chapter five is written as an embedded narrative from Victor Frankenstein's point of view as he tells the tale to Walton. ...read more.

give the reader the impression that although Victor is clearly disgusted by his creation it may be his alter ego and his disgust is more distressing because he is seeing a part of himself he would rather not. Also despite her obvious interest in the scientific world, Shelley clearly has worries about the dangers of tampering with the laws of nature and of removing women from the process of creation. In chapter five this is emphasized by the chasm between Frankenstein's dream of what he would create and his reaction to the reality of his creation. Rather than show it love and tenderness as a mother would to her young, he is disgusted by it and even fearful of the "...monster..." he has created. This warning is further emphasized as Shelley puts a great deal of emphasis on nature's healing powers. For example, when on waking from his long illness Victor sees "...the fallen leaves had disappeared and that young buds were shooting forth..." ...read more.

The arrival of Clerval brings happiness and excitement for Victor and initially revives his spirits. When his illness confines him to bed, it is his friend Clerval that loves and nurses him back to health. This has the effect of emphasizing the nurturing and healing power of family and good friends. This part of the chapter with its feeling of relative calm and normality adds suspense, as for a time the reader is lulled into a false sense of security by the lack of action. In summary, chapter five is a pivotal chapter in the novel as it sees the birth of Victor's creation and for the first time we see a glimpse of the disaster to come. Many themes are covered in this short chapter. It is clear that Shelley has drawn on her own personal experiences, the structure of society and scientific advances of the time and woven these experiences along with many of her radical views into the story. The result is that the novel is deeper and richer than it would have been without this multi-layered approach. Kariann Mortimer Context in Frankenstein - Chapter 5 Page 1 of 2 ...read more.