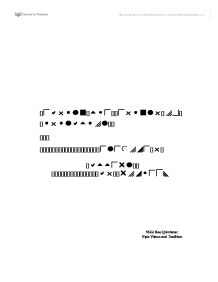 The Odyssey is an epic tale imbued with the shared challenges and experiences of Odysseus, a lost hero attempting to find his way home, and those of Penelope, the wife he has left behind.

?????????????????????????????????? ?? ???????????????????????????? ???????? ?????????????????????????? Nikki Rae Quintanar Epic Vision and Tradition William Shullenberger ~ Fall 2002 ~ The Odyssey is an epic tale imbued with the shared challenges and experiences of Odysseus, a lost hero attempting to find his way home, and those of Penelope, the wife he has left behind. Each of them faces many obstacles on their journey, and each employs distinct tactics in order to surmount these obstacles. In this paper, I shall focus on the act of Penelope weaving and demonstrate how the intricate fibers with which she weaves, become important elements of the plot. As one can imagine in the context of weaving, certain colors or shapes would appear dull or uninteresting on their own, yet when put together become stunning visual works of art. Penelope is an enigmatic character on whom Homer endows the epithet, "circumspect" meaning that she is able to discreetly see and cautiously maneuver around anything which threatens her entrapment. She is in constant motion and in so doing, she is careful to consider all the circumstances and possible consequences of her actions. Prudent and discreet, Penelope exudes wisdom. ...read more.

151-53). He also described how during the nights, "he would lie beside her, of necessity, in the hollow caverns, against his will" (V. 154-55). For each of them, this moment of "being forced" in reality, was fate rapping at the door, signifying changes soon to come. And so begins the hero's journey home. Beginning in Book IX the thread of recklessness occurs when Odysseus talks about his transgressions against the Kikonians. Odysseus freely admits to Alkinoos, "I sacked their city and killed their people, and out of their city taking their wives and many possessions..." (IX. 40-41). A battle ensued as the Kikonians fought back to avenge their loss. As a result, six men from each of Odysseus' twelve ships were killed. Next, they landed in the country of the Lotus-Eaters. Here we see the thread of temptation. These Lotus-Eaters tempted Odysseus' men with the flowering plant. Although the threat posed by the Lotus-Eaters was not mortal, it was dangerous because "... any of them who ate the honey-sweet fruit of the lotus was unwilling to take any message back, or to go away, but they wanted to stay there with the lotus-eating people, feeding on lotus, and forget the way home" (IX. ...read more.

383). Zeus, in turn struck the ship down with a bolt of lightening, smashing it to pieces. Odysseus recalls, "my men were thrown in the water, and bobbing like sea crows they were washed away on the running waves...and the god took away their homecoming" (XII, 417-19). But god did not take away Odysseus' homecoming. The goddess Calypso rescues him as he nakedly clings for life upon her shore. Wounded and weary with grief, he stays with Calypso until he is again strong, and it is the will of the gods that he return home. As Anne Armory discusses in her essay, "The Reunion of Odysseus and Penelope", "at book XIX two main threads of The Odyssey merge, and the action begins to quicken toward its climax" (p.100). At last Odysseus does find his way home to his loving and faithful wife. All is set into motion at the time when Penelope displays her miraculous weaving. "She had washed it, and it shone like the sun or moon" (XXIV. 148). Penelope's weaving was an accumulation of her and Odysseus' tiny threads of experience. In the end it became an epic tale all it's own, a striking testimony of the paths their hearts had taken and how they found their way back home to each other. 7 1 ...read more.