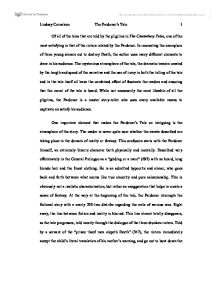 Of all of the tales that are told by the pilgrims in The Canterbury Tales, one of the most satisfying is that of the rioters related by the Pardoner. In recounting the exemplum of three young sinners out to destroy Death, the author uses many different elements to draw in his audience. The mysterious atmosphere of the tale, the dramatic tension created by the length and speed of the narrative and the use of irony in both the telling of the tale and in the tale itself all have the combined effect of fascinate the readers and ensuring that the moral of the tale is heard. While not necessarily the most likeable of all the pilgrims, the Pardoner is a master story-teller who uses every available means to captivate an satisfy his audience. One important element that makes the Pardoner's Tale so intriguing is the atmosphere of the story. The reader is never quite sure whether the events described are taking place in the domain of reality or fantasy. This confusion starts with the Pardoner himself, an extremely bizarre character both physically and mentally. Described very effeminately in the General Prologue as a "gelding or a mare" (693) ...read more.

The quick pace of the story is emphasized not only through the use of dialogue, but also through the sentence structure; the Pardoner uses very short and choppy phrases in his narrative, as shown on line 223: "O dronke man, disfigured is thy face, / Sour is thy breeth, foul artow to embrace". There are no transitional paragraphs to speak of, he simply moves from one scene to the next, giving the impression of having memorized the sermon; he has repeated this tale many times before. The speed of the narrative is deliberate; the Pardoner wishes to convince his audience by the powerfulness of his sermon, not by the depth of his arguments. This reinforces the irony of the tale, in that the pace is so rapid the reader cannot dwell on the hypocrisy of the message. The movement of the story progresses steadily to the climax, which is finished in 10 lines (550-560). All the details are taken care of earlier in the preceding action and dialogue; the author has prepared the reader for the inevitable conclusion of the tale in order that the final action can come swiftly and powerfully. ...read more.

The tale told to the pilgrims by the Pardoner is one of the most enjoyable in all of The Canterbury Tales. This is due to many elements, but mainly to the ability of the Pardoner to captivate his audience with his story. By creating a mystical atmosphere in which the line between reality and fantasy is blurred, the author forces the reader to put aside any notions of 'known' morality in order to better accept the version he professes. The speed and length of the narrative also helps in this regard, ensuring that the audience is so swept up in the pace of the story that they have no time to question the intentions or the truthfulness of the speaker. This speed also has the effect of dramatizing the tale, making the entire experience more exciting and enjoyable. The extreme irony present in the story is another important element, used to create emotional ties, whether positive or not, to both the tale and the teller. In all three examples, the goal remains the same: draw the readers as fully into the story as possible, in hopes of drawing out their 'appreciation' at the end. In any case, the effect of the combination of all the elements is a very satisfying and enjoyable short narrative. ...read more.