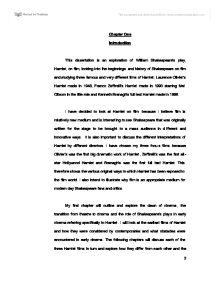 The Portrayal of Shakespeare's Hamlet in Cinema

Chapter One Introduction This dissertation is an exploration of William Shakespeare's play, Hamlet, on film, looking into the beginnings and history of Shakespeare on film and studying three famous and very different films of Hamlet; Laurence Olivier's Hamlet made in 1948, Franco Zeffirelli's Hamlet made in 1990 starring Mel Gibson in the title role and Kenneth Branagh's full text Hamlet made in 1996. I have decided to look at Hamlet on film because I believe film is relatively new medium and is interesting to see Shakespeare that was originally written for the stage to be brought to a mass audience in different and innovative ways. It is also important to discuss the different interpretations of Hamlet by different directors. I have chosen my three focus films because Olivier's was the first big cinematic work of Hamlet, Zeffirelli's was the first all-star Hollywood Hamlet and Branagh's was the first full text Hamlet. This therefore shows the various original ways in which Hamlet has been exposed to the film world. I also intend to illustrate why film is an appropriate medium for modern day Shakespeare fans and critics. My first chapter will outline and explore the dawn of cinema, the transition from theatre to cinema and the role of Shakespeare's plays in early cinema referring specifically to Hamlet. I will look at the earliest films of Hamlet and how they were considered by contemporaries and what obstacles were encountered in early cinema. The following chapters will discuss each of the three Hamlet films in turn and explore how they differ from each other and the stage Hamlet, the representation of Hamlet himself and other main characters mainly Ophelia and Gertrude and their relationship and reactions towards Hamlet. I will also consider location, set and casting issues; who was cast and why specific actors were chosen and why they work well in the role. My final chapters will investigate other modern Hamlets their differences and similarities to my three focus pieces and less obvious adaptations of Hamlet. ...read more.

'A further example of the impact of the Olivier version comes from Glenn Close in the short HBO film The Making of Hamlet 'The first day of shooting he [Mel Gibson] was given by one of the producers the actual shirt that Olivier wore in his famous Hamlet,' And Gibson tells of making 'sure that I was in the hotel room by myself, with the lights out and I tried this shirt on. Gradually I got the courage to turn the lights on and I found that it was probably a little too small, but it fit well enough'' (Ace Pilkington in Davies and Wells, 1994, pp.166) The film opens with a mix of high and low angle shots upon a crowd of traditionally black clad mourners and solemn knights leading into the crypt where Hamlets father is laid to rest. The scene is dark with the only lights on the faces of Claudius, Gertrude and Hamlet. Gertrude's love for Claudius is more demonstrative in this film. In others it is not obvious and there has been much debate over Gertrude's reasons for marrying Claudius; she may have just wanted to keep her own status and her son in line for the throne. Much more affection between the couple is shown in this film. The ghost in Zeffirelli's Hamlet is very different. It comes away from the text by not wearing armour as is stated in the text although this line and the whole scene in which it features has in fact been cut. Also to those who do not know the story, it may not be clear that he is a ghost and he looks very solid and human compared to those in Olivier's and Branagh's films, if a little pallid and unwell. There is nothing obvious to confirm the supernatural nature of the scene, no special effects; Hamlet could be talking to any other character had the text not stated that he is a ghost. ...read more.