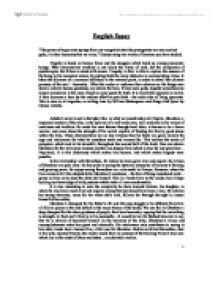 &quot;The power of tragic texts springs from our recognition that the protagonists are men and not gods; it is their humanity that we value&quot; - Discuss using two works of literature you have studied.

English Essay "The power of tragic texts springs from our recognition that the protagonists are men and not gods; it is their humanity that we value." Discuss using two works of literature you have studied. Tragedy is based on human flaws and the struggles which build up among passionate beings. What characterizes mankind is not solely the virtue of each, but the complexity of psychologies, the failure to stand with reason. Tragedy, in fact, is able to capture the essence of the being in his inconstant nature, by putting forth the many obstacles in accomplishing virtue. It takes the dilemma of a common individual to the extreme point, in order to unveil the ultimate prowess of the soul - humanity. What the reader or audience then admires are the things man does to achieve human goodness; we admire the hero. If men were gods, tragedy would become simple melodrama in the eyes of such an easy quest for truth. ...read more.

This is a harsh blow to the reader, but it helps build up our knowledge of wild passions which make all men condemnable. It is also interesting to note the complicity he feels towards Ezinma, his daughter, to whom he also bears much love and respect, saying that she should have been a man. He admires her strong character, cares for her when she's sick, follows her through the night to assure himself of her safety. Okonkwo's disregard for his father's life and life-long struggle to be different from him all falls to pieces in the end (which is the major theme of the book). We can feel in Okonkwo a deep disregard for the sheer goodness of people, their bear humanity, arguing that the main thing is strength, to feed one's family, to be successful...It would be too far fetched however to say that he is devoid of humanity himself. In the harmony of the tribe, Okonkwo's values and accomplishments make him great and admirable. ...read more.

He is also admirable in taking his fate into his hands when confronted with a dilemma (which differentiates him from Gloucester's weakness); he is responsible and charges into life consciously until the moment he goes mad. In the end, when Lear comes out with Cordelia in his arms, howling to the skies and to the world, we reach the climax of the admiration towards Lear. His pain appears so great that the audience identifies with the human feeling of despair. The crash, like a thunderbolt of lightning, hits us straight to the heart and Lear's tears, which he tried to hold in the whole play, drip on everyone's laps. In conclusion, the author of a tragedy must create a compelling character in goodness and sin. It must become a heroic struggle which imples both sides of the spectrum - a person's most condemnable side and most beautiful side. A tragic hero could neither be Hitler or D'Artagnan. They are filled with too much of one and the other. The hero must be someone the reader can identify with in reality, to accompany his struggle and find a better truth. 1 ...read more.