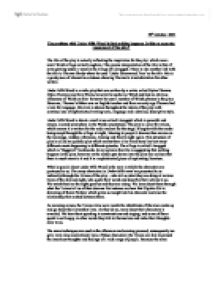 The problem with Under Milk Wood is that nothing happens. Is this an accurate assessment of the play?

19th October, 2003 The problem with Under Milk Wood is that nothing happens. Is this an accurate assessment of the play? The title of the play is actually reflecting the inspiration for the play which was a small Welsh village called Laugharn. The precise interpretation of the title is that of cows grazing under a wood in the village of Llareggub. There is also another link with the title to Thomas Hardy where he used 'Under Greenwood Tree' as the title- this is a good piece of alternative evidence showing Thomas's love/admiration for other writers. Under Milk Wood is a radio play that was written by a writer called Dylan Thomas. Dylan Thomas was from Wales, however he spoke no Welsh and had no obvious influences of Welsh on him- however he uses a number of Welsh phrases in the play. However, Thomas's father was an English teacher and from an early age Thomas had a love for language- this love is shown throughout the whole of the play with continual use of sophisticated writing tools, language and a detailed, descriptive style. Under Milk Wood is about a small town called Llareggub which is peaceful and simple, located somewhere in the Welsh countryside. The play is a play for voices, which means it is written for the radio and not for the stage. It begins with the reader being swept through the village at night, listening to people's dreams then moves on the mornings, midday, afternoon, evening and finally night again. This structure of play is called an episodic play which means there is no fixed story line but many different events happening in different episodes. The village is called Llareggub which is 'Buggerall' backwards. In my opinion this title is suggesting that nothing happens in the play, however as the reader gets drawn into the play one realises that there is much more to it and it is a sophisticated piece of captivating literature. ...read more.

This is most easily recognise though the names of the characters for example it is apparent that Lord Cut Glass is the most distinguished of all the characters where as Mr Dia- Bread is a lot lower on the social ladder as he is a baker and not a Lord. A characters social position does not really affect them in this novel as every one lives in this fairly poor village (with the exception of Lord Cut Glass) on a reasonably self sustained poor/ traditional lifestyle- the reason for this is that the play is about this type of life, the play is about the poor life's that the welsh villages lead and how to these people it doesn't matter and they are happy; Thomas has used this so many times however it still remains effective. Another way in which the people are socially expressed is the way in which they act, a key contrast to show this point is Mr Dia Bread saying "Me, Dia Bread, hurrying to the bakery" and Mr Pugh saying "yes, dear" to his wife; this use of language effectively portrays the character and the characters social class. The characters and setting are created very differently to an average play or story which would describe each character for example "He has large teeth, a pale face and a humongous nose" it is different as it does not openly describe characters but 'shows' characters. What I mean by this is that Thomas shows characters by how the characters wish to describe themselves which draws the audience into the play and in a sense gives a better image as the (imaginary) character created by Thomas has its own say about its self- Thomas's say- it is more 'real'. An excellent example of this is the short but informative description of Nogood Boyo by another child (feminine), this child says to her mother "Nogood Boyo gave me three pennies yesterday but I wouldn't". ...read more.