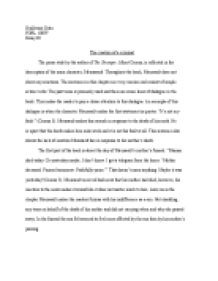 The prose style by the author of The Stranger, Albert Camus, is reflected in the description of the main character, Meursault

﻿Guillermo Ortiz FORL 100W Essay #2 The creation of a criminal The prose style by the author of The Stranger, Albert Camus, is reflected in the description of the main character, Meurasault. Throughout the book, Meursault does not show any emotions. The sentences in this chapter are very concise and consist of simple action verbs. The past tense is primarily used and there are some lines of dialogue in the book. This makes the reader to pay a closer attention to this dialogue. An example of this dialogue is when the character Meursault makes the first statement in quotes. ?It?s not my fault.? (Camus 3). Meursault makes this remark in response to the death of his moth. He is upset that the death makes him miss work and it is not his fault at all. This sentence also shows the lack of emotion Meursault has in response to his mother?s death. The first part of the book is about the day of Meursault?s mother?s funeral. ...read more.

After observing that Meursault is indifferent to the death of his own mother it becomes clear that he is also indifferent to his own life. Nothing in life seems to have a clear meaning and he does not have the capacity to control his actions or give them a meaning. Meursault does not take the death of his mother as an emotional experience. This event scared Marie, who is a girl he met on the beach and she is also surprised by the indifference that shown by the recent lost. It is disrespectful to his mother that after his mother passed away they went to watch a comedy movie. There comes a time in the reading that portrays Meursault as being sad. He begins discussing how his apartment is too big for him. It was perfect when he was living with his mother. Now he is alone. For a moment it makes the readers think that he is having some emotions related to the event, but then it becomes apparent that he is just bored and lonely. ...read more.

After about forty-five minutes of deliberation the verdict is read. Meursault is found guilty and sentenced to death. Nobody can believe that he is being sentenced to death. Everyone thinks it was going to be an easy case. This makes people think that maybe he is being punished for be indifferent to ?Maman? death. This sentenced given makes Meursault understand life better. ?Meursault seems to be having an internal battle whereby he is trying to reconcile his life, philosophy, and beliefs with his inevitable execution? (Delahoyde, ?Camus, The Stranger?). He is confronting death but by doing it he finds peace. Before his execution he feels at peace and with courage. He is ready to die because he feels as though he probably he deserves it. He seems to be someone else and in this short instance he is appreciating what is life. Meursault knows he did wrong and must pay for his actions. It is probably is too late for regret but for God it is never too late. Also he knows that no one should cry at his mother?s funeral. He feels vindicated by the moral crime the committed. ...read more.