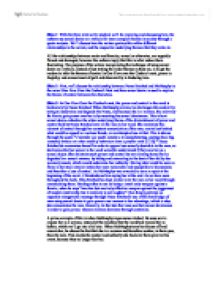 The purpose of the writers incorporating the technique of using s****l desire as a vehicle, instead of just stating the wider themes as they are, is to get the readers to infer the themes of control in One Flew over the Cuckoos nest, power in Engleby,

Slide 1: With the three texts we've studied, we'll be exploring and discussing how the authors use s****l desire as a vehicle for more complex themes in society through a quote analysis. We'll discuss how the writers portray this within different relationships in the novels, and the respective underlying themes that they relate to. All the relationships between males and females, s****l or otherwise, are arguably flawed and damaged, however the authors imply that this is what makes them fascinating. The purpose of the writers incorporating the technique of using s****l desire as a vehicle, instead of just stating the wider themes as they are, is to get the readers to infer the themes of control in One Flew over the Cuckoo's nest, power in Engleby, and concealment of guilt and abnormality in Enduring love. Slide 2: First, we'll discuss the relationship between Nurse Ratched and McMurphy in the novel One Flew Over the Cuckoo's Nest and how s****l desire is used to explore the theme of control between the characters. Slide 3: In One Flew Over the Cuckoo's nest, the power and control in the ward is held solely by Nurse Ratched. When McMurphy arrives, he challenges this control by trying to undermine and degrade the Nurse, and because she is a woman, the only way for him to gain power over her is by asserting his s****l dominance. This is how s****l desire embodies the wider underlying theme of the diminishment of power and control held by Nurse Ratched over all the men in her ward. ...read more.

It made him angry because he felt uncomfortable with his lack of s****l libido, it's as if he felt she had backed him into a wall and there was no way out for him. Following this, Another event in the novel was Mike Engleby's reaction to the r**e scene in the making of the film he helped out in. The quote "'And it didn't upset you to see her being raped'... I laughed, "Not at all, it was fun, it was interesting"' shows a twisted sort of indifference towards a very unsettling scene. From this we can infer an unusual detachment from any sort of universal s****l desire. He seemed undisturbed by watching quote "his friend" and object of his desire, s******y attacked and victimised. Though it was acted, it's not a scene that someone would normally find fun or interesting, especially if it's the girl he suppospedly longed for. Overall, this shows Engleby's emotional separation from what would normally be in the mind of a man his age. Faulkes incorporates a blatant lack of s****l desire as a way for Engleby to demonstrate his position of power over Jen, which is shown later in the novel when he tries to kill her. Finally, This idea is further explored when Engleby says, "Then Jennifer began to cry because...I don't know why Jennifer cried. Perhaps it was because she felt Alex didn't desire her anymore." This occurs as a result of the r**e scene. It's significant because it demonstrates his complete separation from Jen's emotions, as he's unable to comprehend that the reason for Jen's tears is because r**e is a traumatizing thing for a woman to act out. ...read more.

Lastly,This point can be moreover backed up by Joe's quote 'I could imagine how an older man might risk everything.' There is an obvious emphasis on the word older, as it wasn't necessary for McEwan to include that word. This suggests that there is something unusual about it, or at least that society views it as unusual. We can see that because they feel the need to hide their relationship, they know themselves that it is against the norm as if it was love that they had, they wouldn't feel ashamed to hide it; however they do the opposite thus showing that it is the act of s*x and s****l desire involved that they are ashamed by. The quote '. "we know soon we are going to have to face all kinds of complications' can further reinforce the knowledge they have about the wrongness of their relationship however they cowardly hid their affair causing grief amongst people and Jean Logan in particular. The fact that the professor even acknowledges this when he says "we never imagined that our clumsy attempts at concealment would cause such distress" further emphasizes how wrong it was and the implications it had on other people. In conclusion, the use of s****l desire as a vehicle for underlying themes in society is clearly shown in the three studied texts. The authors incorporate this technique because it asks us to question and consider the deeper meaning behind whats on the surface. These themes are predominant in revealing the message that the author is trying to portray about society. ...read more.