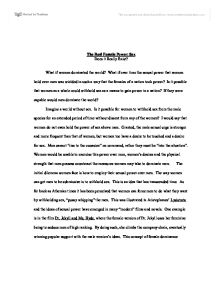 The Real Female Power: s*x - Does it Really Exist?

The Real Female Power: s*x Does it Really Exist? What if women dominated the world? What if over time the s****l power that women hold over men was wielded in such a way that the females of a nation took power? Is it possible that women as a whole could withhold s*x as a means to gain power in a nation? If they were capable would men dominate the world? Imagine a world without s*x. Is it possible for women to withhold s*x from the male species for an extended period of time without dissent from any of the women? I would say that women do not even hold the power of s*x above men. ...read more.

This was illustrated in Aristophanes' Lysistrata and the ideas of s****l power have emerged in many "modern" films and novels. One example is in the film Dr. Jekyll and Ms. Hyde, where the female version of Dr. Jekyll uses her feminine being to seduce men of high ranking. By doing such, she climbs the company chain, eventually winning popular support with the male version's ideas. This concept of female dominance through s*x has its restrictions though. On a more universal level, if women, as a group, successfully attempted to withhold s*x, men would resort to their physical dominance. This problem is one of physical capability. The evolution of the human has come to a point where the male is physically stronger than the woman. ...read more.

s*x is something a man cannot do without will. It is an activity in which the two genders depend on each other and therefore withholding s*x is not a true option, women need it to further the species and to fulfill their desires. On a small scale, withholding s*x from men is a viable option to get things done. However, on a global scale it is impossible for women to gain political power through s****l means; too much depends on it. There is no forced entry on men. Women, as a group, can never use s*x as a way to move up in the world or dominate a society. Gore Vidal said, "s*x is. There is nothing more to be done about it. s*x builds no roads, writes no novels and s*x certainly gives no meaning to anything in life but itself." s*x is no means for true power. ...read more.