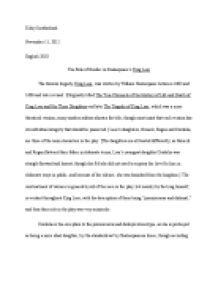 The Role of Gender in Shakespeares King Lear

﻿Kirby Southerland November 11, 2012 English 2010 The Role of Gender in Shakespeare?s King Lear The famous tragedy, King Lear, was written by William Shakespeare between 1603 and 1606 and later revised. [Originally titled The True Chronicle of the History of Life and Death of King Lear and His Three Daughters and later The Tragedy of King Lear, which was a more theatrical version, many modern editors shorten the title, though most insist that each version has its individual integrity that should be preserved.] Lear?s daughters, Goneril, Regan and Cordeila, are three of the main characters in the play. [The daughters are all treated differently, as Goneril and Regan flattered their father in elaborate terms, Lear?s youngest daughter Cordelia was straight forward and honest, though she felt she did not need to express her love for him in elaborate ways in public, and because of her silence, she was banished from the kingdom.] The mistreatment of women in general by all of the men in the play, but mainly by the king himself, is evident throughout King Lear, with the description of them being ?promiscuous and disloyal,? and thus their role in the play was very miniscule. ...read more.

All of the wonderful characteristics that Cordelia possess make her the ideal woman in the play, being respectful and dignified but still powerful. Cordelia?s honesty and dignity contrast greatly with the hypocrisy of her sisters. Goneril and Regan, King Lear?s eldest daughters possessed traits that were foul and unpleasant. After King Lear banishes Cordelia from his kingdom, he divides it between his oldest two daughters. Through the duration of the play, the two daughters misused their power and continuously devised malicious plans against their father. Shakespearean women were considered to be quiet, shy and submissive, which is the complete opposite of the two oldest daughters of King Lear. They were vicious and aggressive and these traits bring out the male characteristics in them, which in turn makes them the ideal villain. Being adulterous, Goneril displays a stronger male characteristic, telling a man other than her husband that he is a wonderful man and deserves her more than her own husband. (4,ii, 29) Goneril was shown as being the more cunning of the two daughters, as this is shown with by her sneakily talking about her husband behind his back, saying of him, ?it is the cowish terror of his spirit that dares not undertake, (4, ii,13-14)? though as the play proceeds, Regan becomes just as vicious. ...read more.

Though there is no mention of their mother in the play, the three daughters are independent and strong, which shows the real nature of women in Shakespearean times. With little guidance, the sisters manage to pursue their desires, despite living in a society which is predominantly male-dominated. It was widely thought that women in this era were incapable of running a kingdom but this tragedy shows women to be wise and cunning and more than capable of handling power. Although the eldest sisters of King Lear prove to misuse their power, they are still depicted to be commanding and overruling, whereas Cordelia shows some characteristics of the typical delicate Shakespearean woman, though she is still strong and noble. Each of the three women in King Lear plays a major role. The youngest daughter, being pure and devoted, starts off the entire tragedy, as well as finishes it. The two oldest daughters, being ruthless and malicious, bring out the actual story within the play with their continuous mistreatment of their father. The women in King Lear play a highly important role as they show the true nature of women, though the difference between how women were perceived by the behavior portrayed by Regan and Goneril contrasted with how women were supposed to be, as displayed by Cordelia. ...read more.