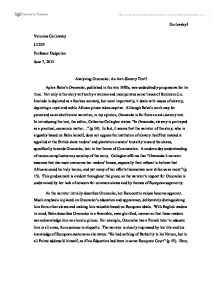 The Role of Slavery in 'Oroonoko'. Aphra Behns Oroonoko, published in the late 1600s, was undoubtedly progressive for its time. Not only is the story written by a woman and incorporates some traces of feminism (i.e. Imoinda is depicted as a fearles

Veronica Gorlovsky LI 203 Professor Dulgarian June 7, 2011 Analyzing Oroonoko: An Anti-Slavery Text? Aphra Behn's Oroonoko, published in the late 1600s, was undoubtedly progressive for its time. Not only is the story written by a woman and incorporates some traces of feminism (i.e. Imoinda is depicted as a fearless woman), but most importantly, it deals with issues of slavery, depicting a royal and noble African prince taken captive. Although Behn's work may be perceived as an abolitionist narrative, in my opinion, Oroonoko is far from an anti-slavery text. In introducing the text, the editor, Catherine Gallagher states: "In Oroonoko, slavery is portrayed as a practical, economic matter..." (p 16). In fact, it seems that the narrator of the story, who is arguably based on Behn herself, does not oppose the institution of slavery itself but instead is appalled at the British slave traders' and plantation owners' brutality toward the slaves, specifically towards Oroonoko, heir to the throne of Coramantien. A modern-day understanding of r****m complicates any scrutiny of the story. Gallagher affirms that "Oroonoko's narrator assumes that she must overcome her readers' biases, especially their refusal to believe that Africans could be truly heroic, and yet many of her efforts themselves now strike us as r****t" (p 15). This predicament is evident throughout the piece, as the narrator's respect for Oroonoko is undermined by her lack of concern for common slaves and by themes of European superiority. As the narrator initially describes Oroonoko, her Eurocentric values become apparent. Much emphasis is placed on Oroonoko's education and appearance, deliberately distinguishing him from other slaves and making him valuable based on European ideals. With English readers in mind, Behn describes Oroonoko in a favorable, even glorified, manner so that these readers can acknowledge him as a heroic prince. For example, Oroonoko has a French tutor to educate him in all areas, from science to etiquette. ...read more.

There is no further mention of these slaves sold with Oroonoko. Only more romanticized details of Oroonoko's captivity follow. While the common practice of renaming the slaves is intended to belittle slaves and destroy their past identity, Trefry renames Oroonoko Caesar, representing his splendor. Upon arrival at the plantation, Oroonoko/Caesar is received "more like a governor than a slave" (p 69). He is given a small house and is not forced to work with the others. In the article "Royalism and honor in Aphra Behn's 'Oroonoko,'" author Anita Pacheco, affirms that Behn portrays Oroonoko in terms of his royal status, not as an African slave and states: "Consequently, Oroonoko is a slave in name only; that, apparently, is degradation enough; actual slave labor is quite unthinkable." Clearly, Behn's description of Oroonoko and his experience on the plantation is outrageously far from what the vast majority of slaves endured. More so, in this scene, Behn depicts the slaves as undignified as, upon seeing Oroonoko, many of the men whom he had actually sold into slavery kiss his feet and pay him "Divine Homage" (p 70). One can go as far as to say that Behn is rationalizing slavery, suggesting that these slaves are intrinsically submissive and in need of a master. Behn's lack of opposition towards slavery is also shared by Oroonoko himself. In fact, as Trefry is confiding in Oroonoko/Caesar, he tells him of his infatuation with Clemene. Ironically, Oroonoko is not yet aware that Celemene is in fact his long-lost love Imoinda and thus, he views her as any common slave. Oroonoko's own support of the master/slave relationship is evident as he says: "...[I] wonder how she escapes those who can entertain her as you can do; or why, being your slave, you do not oblige her to yield" (p 71). This statement provokes the idea of ownership, that Oroonoko/Caesar believes that Trefry's slaves are his property and he may do with them as he wishes. ...read more.

The final scenes of Oroonoko are the most interesting and solidify the idea that the novel is not an anti-slavery text. During the last days of Oroonoko's life, he is betrayed by both the slaves and the narrator, the only European whom he feels he can fully trust. Oroonoko finally suffers in one respect like the common slaves do when he finds out that Imoinda is pregnant and fears bringing a child into slavery. When the slaves who flee with Oroonoko give up on the uprising and return to captivity, he feels foolish for believing in men "who were by Nature Slaves, poor wretched Rogues, fit to be us'd as Christians Tools; Dogs, treacherous and cowardly, fit for such Masters" (p 90). Although the narrator claims to be a true friend to Oroonoko and scorns Byam for brutalizing him, her European alliances become evident as she agrees to spy on him, revealing her inherent distrust and trepidation of all slaves, including Oroonoko. In fact, upon finding out about Oroonoko's escape, the narrator's disloyalty becomes palpable as she confesses her fear of being killed by him and the other slaves. In conclusion, there are a various examples in this novel that, upon close examination, lead one to believe that the text does not discourage slavery. Pacheco sums it up best: "It is also difficult to discount the abundant and frequently cited textual evidence that Behn's narrative is entirely uncritical of the institution of slavery: the matter-of-fact account of the operation of the colonial slave trade in Surinam; the hero's involvement in a slave trade based on the sale of all prisoners of war except those whose high birth exempts them from such indignity; Oroonoko's self-reproach, after the collapse of the slave uprising, for having expected courage and valor from men who are "by Nature Slaves"". Yet again, these examples prove that Behn's novel does not condemn the institution of slavery. Although it seems that Aphra Behn's overall goal was to show the dishonorable, deceitful, and barbaric ways of European plantation and slave owners, she indirectly rationalizes the trade of African slaves. ...read more.