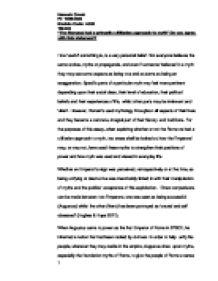 The Romans had a primarily utilitarian approach to myth Do you agree with this statement?

"The Romans had a primarily utilitarian approach to myth" Do you agree with this statement? How 'useful' something is, is a very personal belief. Not everyone believes the same stories, myths or propaganda, and even if someone 'believes' in a myth they may see some aspects as being true and as some as being an exaggeration. Specific parts of a particular myth may feel more pertinent depending upon their social class, their level of education, their political beliefs and their experiences of life, whilst other parts may be irrelevant and 'alien'. However, Roman's used mythology throughout all aspects of their lives and they became a concrete, integral part of their history and traditions. For the purposes of this essay, when exploring whether or not the Romans had a utilitarian approach to myth, two areas shall be looked at; how the Emperors' may, or may not, have used these myths to strengthen their positions of power and how myth was used and viewed in everyday life. Whether an Emperor's reign was perceived, retrospectively or at the time, as being unifying or destructive was inextricably linked in with their manipulation of myths and the publics' acceptance of this exploitation. Direct comparisons can be made between two Emperors; one was seen as being successful (Augustus) whilst the other (Nero) has been portrayed as 'crazed and self obsessed' (Hughes & Hope 2011). When Augustus came to power as the first Emperor of Rome in 27BCE, he inherited a nation that had been racked by civil war. ...read more.

Nero, in an attempt to emulate Augustus, took Apollo as his patron. Like Augustus he wanted to be seen as an Emperor representing life, light, the sun, peace and the arts (Graves 1979). Nero had a great passion for the arts, especially theatre, and used to act out characters associated with tragic myth. Over his lifetime Nero was linked with the murders of his mother, Agrippina and his pregnant wife Poppaea. When choosing roles to play, Nero would draw attention to his possible crimes by depicting mythical characters associated with these crimes (Orestes and Periander). By choosing these characters Nero achieved two outcomes. Firstly, he associated himself with characters, who although they had committed a great crime, they were proved to be crimes that were either justifiable or a case of temporary insanity. Orestes killed his mother, on Apollo's instructions, after she had murdered his father and had denied him his inheritance. By murdering his mother Orestes has released Mycenae from his mother's tyrannical rule. By portraying Orestes Nero could justify his possible guilt of Agrippina's murder by releasing Rome from her rule (Champlin 2003). Equally, by playing Periander who murdered his wife whilst temporarily insane, thanks to the intervention of the Gods, Nero could insinuate that, like Periander, the Gods had made him temporarily lose touch with reality. Secondly, by portraying himself as a hero associated with myth, even if he had committed the crimes he was accused of, he was raising himself above ordinary people. ...read more.

Myths were manipulated and politicised for the purposes of personal and dynastic power. They were a powerful set of images that when used well, portrayed the ruling class and specifically the Emperor in a positive light. As we have seen, Augustus is remembered as a wise and considered ruler who brought about unity across the empire. Whereas Nero is remembered for being mad, unpredictable and possibly capable of matricide and of murdering his wife. Nero's use of myth, especially in his theatrical performances, were controversial and daring, which led to criticism, his being ostracised by the elite and ultimately his death. The citizens of Rome however, appeared to use myth in a much more personal way. Their knowledge of myths was more likely to be patchy, often just being able to pinpoint the important (usually shocking) highlights. Their use of imagery in their homes was much more about personal taste and what the myths and characters symbolised to them on a personal level, as well as a way of promoting to the outside world how sophisticated they were. Myths were a part of their lives, it would have influenced their views of their leaders and of the world they inhabited but it was not something that they necessarily "used" in their daily lives in the same way the Emperors did. What the daily use of mythological representations by ordinary people along with the Emperors' systematic propagandist use of myth helped achieve though, was a culture that could all draw upon symbols and ideas that united them as a nation. ...read more.