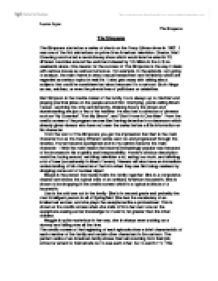 The Simpsons The Simpsons started as a series of shorts on the Tracy Ullman show in 1987. It was one of the first animations on prime time American television. Creator, Matt Groening constructed a revolutionary show which would later be aired in 70 different countries around the world and viewed by 15 million in the U.S on weekends alone. One reason for the success of The Simpsons is the way it deals with serious issues as well as humorous. For example, in the episode I am going to analyze, the main theme is about sexual harassment and femininity which are regarded as serious topics in real life. It also gets away with talking about subjects that could be considered as taboo because it is a cartoon. Such things as sex, adultery, or even the private lives of politicians or celebrities. Bart Simpson is the trouble maker of the family. He is always up to mischief and playing practical jokes on the people around him. Grafitying, prank calling Moe's Tavern, watching the Itchy and Scratchy, idolizing Krusty the Clown and skateboarding are just a few of his hobbies. ...read more.

In real life it is not dissimilar, a good example would be Nike trainers that are sold worldwide and the amount of advertising it receives. The advertising normally influences the customer who then goes on to influence many with the product. When Homer and Marge escape the 'Candy Industry Trade' another satire is shown by a huge candy explosion illustrating how an action movie would use these type of scenes. The sound of the explosion is made to sound very realistic which normally wouldn't be expected from a cartoon. The heart of this episode is found when Homer drives Ashley home in his car, you can tell that Ashley feels pressured and is reluctant at the least to be alone with a man. When Ashley eventually reaches her destination, Homer reaches for her backside for the sweet that was left attached to her jeans. Due to Ashley's femininity she takes this as a sexual attack of some sort, the episode reaches a high temperature from this point onwards. The public start harassing Homer for the fake or misunderstood accusations made by Ashley Grant. ...read more.

In the end Homer is proven innocent, Rock Bottom apologize briefly along with a couple of hundred other issues. This shows that when the media get their facts wrong, they are averse to apologize or do it briefly so it will not affect their ratings. Homer finds he has learnt nothing from his experience and gives T.V a hug telling it, "Let's never fight again". The Simpsons can appeal to any type of audience as it contains many different degrees of comedy. Older and younger viewers can all empathize with the cartoon. Mainly older viewers relate to or find the satirical scenes entertaining such as the man advertising the wax lips, or even the short reconstruction propaganda film of Homer in the car with Ashley. There are countless others which make it so funny. The younger generation may find the more simplistic parts of the cartoon more comical such as the candy trade explosion where Homer is lifted high above his feet, which is also satirical on action films. The quantity and range of comedy and satirical scenes are immense and all are very witty which is why The Simpsons attracts a huge audience because of its mass appeal. Lucien Joyce The Simpsons ...read more.