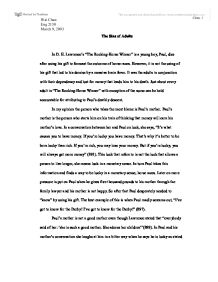 The Sins of Adults - In D. H. Lawrence's &quot;The Rocking-Horse Winner&quot; is a young boy, Paul, dies after using his gift to forecast the outcome of horse races.

The Sins of Adults In D. H. Lawrence's "The Rocking-Horse Winner" is a young boy, Paul, dies after using his gift to forecast the outcome of horse races. However, it is not the using of his gift that led to his demise by a massive brain fever. It was the adults in conjunction with their dependency and l**t for money that leads him to his death. Just about every adult in "The Rocking-Horse Winner" with exception of the nurse can be held accountable for attributing to Paul's deathly descent. In my opinion the person who takes the most blame is Paul's mother. Paul's mother is the person who starts him on his train of thinking that money will earn his mother's love. In a conversation between her and Paul on luck, she says, "It's what causes you to have money. If you're lucky you have money. That's why it's better to be born lucky than rich. ...read more.

It is understandable if she did not wish to share this information with Paul; he is merely a child and should not be involved in the financial status of the family. However his mother did not have to reply in a cold and absent voice. There is no reason why his mother should be cold and absent to her child after receiving a gift of such magnitude. This denies any gratitude Paul would receive from giving money to his mother. He is getting a message that she needed more money and he needed to be lucky once again. Paul's Uncle Oscar is another adult who takes blame for what happens to Paul. When Uncle Oscar finds out that Paul is making bets with Bassett, he didn't make any comments or attempts to tell the boy that gambling is wrong. In fact Oscar endorsed it. He too used Paul's ability to predict horse races to gamble. ...read more.

He needed to work to support himself and his family. His absence meant that Paul had no one to play with, no one to admire and idolize. All of these activities would have led Paul away from the world of gambling. It would have kept him from spending so much time with Bassett and the races. This story illustrates how money is evil and how money corrupted the innocence of Paul. Each character played a key role in the death of this innocent young boy. Perhaps if one of these characters had not participated in their role Paul's death might have been averted. There is also a message in the story stating money cannot buy everything. Paul's mother received over eighty thousand pounds but at the cost of her son's life. I doubt that she is happy. The money was tainted with the blood of Paul. There is a question that comes up at the end that would determine the character of Paul's mother. Will she take the money? Which in turn means was the life of Paul worth the money that he won? I think not. Chan, 1 ...read more.