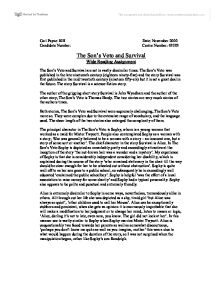 When Sophy marries Mister Twycott it is a turning point in the story. Mister Twycott, who was Sophy's husband, a rich upper class man knew that by marrying Sophy it would not help his social status, 'Mr Twycott knew perfectly well that he had committed social suicide by this step, despite Sophy's spotless characters'. In the two stories The Son's Veto and Survival, the two women, Sophy and Alice are not treated that well. The women are seen as inferior to the men, just an object you can take control of. I do not think Alice's husband treated her very well as he took her on the spaceship. Spaceships are predominately male orientated place, so it was a surprise to all the males on the spaceship that there was a member of the opposite s*x on the Falcon. The men don't respond wonderfully to there being a female on board. I feel the men are s****t, prejudiced and tremendously narrow minded. Mister Twycott treated Sophy slightly negligently, as Sophy had no real control over anything; 'She was left with no control over anything that had been her husband's beyond her modest personal income'. Men had control over women, I doubt the women agreed with this, but they were powerless to complain due to there place in society. ...read more.

Alice had various chances to modify her decision, in spite of the fact that she did not, 'all you have to do is to say you've changed your mind'. I do not agree with Alice as she undoubtedly sacrificed others on the spaceship Falcon, including the crew and the passengers. She was certainly trying to obtain special, individual treatment as she was pregnant and she was a member of the opposite s*x. To her it did not matter about the well being or the significance of others, it just matters about her in her eyes, this is tremendously egoistic self-centred. She was also extremely manipulative to try and achieve what she wants, 'there was a man who died yesterday. Bowman. I thought I could have his rations'. I sympathise more with Sophy as she sacrificed her self and not other as Alice did. Sophy sacrificed her home, where she lived (Gaymead) and her friends and family and also the change of marrying Sam. She knew that by marrying Mister Twycott, a rich upper class man, that she would benefit financially. She also knew that by marrying Mister Twycott people see Sophy as upper class, but Sophy attempted to act more higher in society by the way see talked, dressed and acted. Sophy probably would have married Sam if I were not for her manipulative, loathsome son Randolph. ...read more.