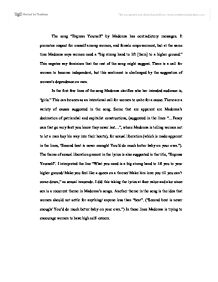 The song "Express Yourself" by Madonna has contradictory messages. It promotes respect for oneself among women, and female empowerment, but at the same time Madonna says women need a "big strong hand to lift [them] to a higher ground." This negates any feminism that the rest of the song might suggest. There is a call for women to become independent, but this sentiment is challenged by the suggestion of women's dependence on men. In the first few lines of the song Madonna clarifies who her intended audience is, "girls." This can be seen as an intentional call for women to unite for a cause. There are a variety of causes suggested in the song. Some that are apparent are Madonna's decimation of patriarchal and capitalist constructions, (suggested in the lines "...Fancy cars that go very fast/ you know they never last...", where Madonna is telling women not to let a man buy his way into their hearts), for s****l liberation (which is made apparent in the lines, "Second best is never enough/ You'd do much better baby on your own."). ...read more.

The song makes reference to independence in the line "you'd do much better baby on your own." However, "baby" would be best off with her Mr. Right. This contradicts the message of woman's empowerment that is suggested in the rest of the song. The song offers a new point of view in the stanza, "And when you're gone he might regret it/ Think about the love he once had/ Try to carry on, but he just won't get it/ He'll be back on his knees..." Here she suggests that the man is also dependent on the woman. Additionally, these lines are sung to a slightly different tune, (it is the intermediate stanza) to further demarcate it from the rest of the song. The beats are typical to pop songs from the 80's. They are retro- beats that are peppy, upbeat, brassy and standard to the dance music of that time. They make the listener tap his/her feet in time to the beat, yet the music is empty and not very meaningful. ...read more.

self is sung on F sharp to F. The word as well as the concept gets divided and put in motion, articulating agency through positions which remain partial and temporary. The melody thus prevents what we would call in narrative terms an ideological closure. There is constant change and no recapitulation. The same theme can be found in the message of the song. She touches upon ideas and then goes on to a new idea which is different from, and often contradicts her last suggestion. Overall, the song is not path breaking in the political message it carries. Very early on women were told, "Why settle for Harvard when you can get Yale?" referring to the male students at both colleges. Madonna's song has the same message, i.e. don't settle for second best. It makes reference to s****l liberation, and promotes an anti-materialistic society. However, in the end she is just revisiting the old 'boy-ravishes-girl', and 'true-love' story. What the audience expects from a performer like Madonna is to push the limits, and tread new ground. The song 'Express Yourself' fails to do this. ...read more.