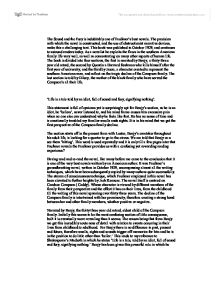 The Sound and the Fury

The Sound and the Fury is indubitably one of Faulkner's best novels. The precision with which the novel is constructed, and the use of obstructionist narrative devices, make this a challenging text. This book was published in October 1929, and continues to astound readers today. As a novelist he exploits the flaws in the southern American family life very well, as well as concentrating on many other aspects of human life. The book is divided into four sections, the first is narrated by Benjy, a thirty three year old r****d, the second by Quentin a Harvard freshman who kills himself after the first year of university, and the third by Jason, a character created to represent the southern American man, and reflect on the tragic decline of the Compson family. The last section is told by Dilsey, the mother of the black family who have served the Compson's all their life. 'Life is a tale told by an idiot, full of sound and fury, signifying nothing'. This statement is full of cynicsm yet is surprisingly apt for Benjy's section, as he is an idiot, he 'bellers', never ...read more.

The novel itself is centred on Candace Compson ( Caddy). Whose character is viewed by different members of the family from their perspective and the effect it has on their lives, from the childhood till the writing of this novel spanning over thirty three years. The decline of the Compson family is intertwined with her promiscuity, therefore creating a strong bond between her and other family members, whether positive or negative. Narrated by Benjy, the thirty three year old r****d, eldest child of the Compson family. Initially this seems to be the most confusing section of little consequence, bu7t it is eventually more revealing than it seems. The reason being that from Benjy we get this incredibly acute ness of detail with relation to events occurring in their lives from childhood to adulthood. For Benjy there is no difference in past, present and future, therefore smells, sights and sounds trigger off memories for him and he is in the position to do little other than 'beller.' This leads to my reference to Shakespeare's Macbeth in which he states 'Life is a tale, told by an idiot, full of sound and fury, signifying nothing.' ...read more.

Another object, which is prominent in Benjy's life is the library mirror. It is said that mirror reflected Benjy's inability to grasp the reality whereas I am of the view that the writer substituted mirror for the stage where the main p-layers performed their roles and then bet out of the stage. Similarly whne the action is finished he can no longer view them in the frame of the mirror. Initially it is difficult to grasp the roles of the characters but once a chronology can be established it becomes easier to understand.. The names of the servants have bee used to denote time of the vents. Versh is around in Benjy's early days. TP, when he was an adolescent. Luster is looking after the adult Benjy. The losses suffered by the family have been narrated and very cleverly disguised by the author. Although at the time of given loss, various characters are shown to react differently signifying their subsequent performance in life. Indicated by Jason keeps his hands in his pocket at the time of Dammudy's death. When this character is developed further he is shown to be obsessed with monetary affairs. y are on a golf course. 'Caddie' is the word shouted repeatedly ...read more.