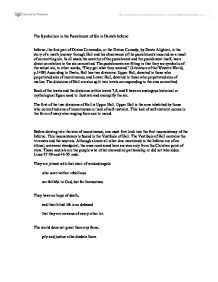 The Symbolism in the Punishment of Sin in Dante's Inferno

The Symbolism in the Punishment of Sin in Dante's Inferno Inferno, the first part of Divina Commedia, or the Divine Comedy, by Dante Alighieri, is the story of a man's journey through h**l and his observance of the punishments incurred as a result of committing sin. In all cases the severity of the punishment and the punishment itself, has a direct correlation to the sin committed. The punishments are fitting in that they are symbolic of the actual sin; in other words, "They got what they wanted." (Literature of the Western World, p.1409) According to Dante, h**l has two divisions: Upper h**l, devoted to those who perpetrated sins of incontinence, and Lower h**l, devoted to those who perpetrated sins of malice. The divisions of h**l are also split into levels corresponding to the sins committed. Each of the levels and the divisions within levels 7,8, and 9 have an analogous historical or mythological figure used to illustrate and exemplify the sin. The first of the two divisions of h**l is Upper h**l. Upper h**l is the area inhabited by those who committed sins of incontinence or lack of self-restraint. This lack of self-restraint comes in the form of many sins ranging from s*x to mood. Before delving into the sins of incontinence, one must first look into the first inconsistency of the Inferno. This inconsistency is found in the Vestibule of h**l. The Vestibule of h**l contains the trimmers and the neutrals. Although almost all other sins mentioned in the Inferno are of an ethical, universal standpoint, the ones mentioned here are sins only from the Christian point of view. These neutrals are the people who either showed no partisanship or did not take sides. Lines 37-39 and 46-50 read: They are joined with that choir of wicked angels who were neither rebellious nor faithful to God, but for themselves. They have no hope of death, and their blind life is so debased that they are envious of every other lot. ...read more.

The eighth circle of h**l is dedicated to those whose sins are of a fraudulent nature against those with no special trust and canto eighteen describes the first division, known as a bolgia, of the eighth circle. This bolgia contains those guilty of pandering, seduction, and flattery. As with other sins of a s****l nature, the panders and the seducers are kept forever moving, this time in a circular path, by a devil wearing the horns of adultery. The representative of pandering is a shade, the first one showing shame, known as Venedico Caccianemico. Venedico's sin was in the selling of his sister to the Marquis of Este. The seducers are moving on the same circular route as the panders but in the opposite direction. Representative of the sin of seduction is Jason. His crimes include the seduction of the Colchians to acquire the golden fleece, the s****l seduction of Hypsipyle, and for the seduction and deception of Medea. The next bolgia contains the flatters who "like dogs, lick the sores of those they exploit."(Literature of the Western World, p.1484) Like dogs, these sinners must live in the filth of their own excrement, among other things, as shown in lines 112-114: We reached that place, and down in the ditch I saw people plunged in excrement which seemed to have come from human privies. The example used here is of Tha�s, a literary demimondaine who when asked by her paramour "Have I great favor with you?" her answer was "No, marvelous!" Dante now finds himself among the Simonists. Named after Simon Magus who tried to buy the God given powers of the apostles, simonists made money by selling ecclesiastical pardons or offices. God's sentence for simony is placement into holes, upside down, with the feet and calves protruding and on fire. This punishment is symbolic of the apostolic succession of Episcopal office. Pope Nicholas III is used as an example of simony as he used his office to advance undeserving members of his own family, lining his own pockets in the process. ...read more.

The example given for murderers of kindred is of the two counts of Mangona, brothers who killed each other over an inheritance. The second division is named after Antenor, a Trojan who betrayed his city to the Greeks. Antenora is the region dealing with those who have committed fraudulent acts against party and country. Cited here is Bocca degli Abati who, in the middle of a battle between the Gelfs and the Ghibellines, cut off the hand of the standard bearer; this act was seen as the cause of the defeat. Tolomea, the third division in Cocytus, is named for the viscous captain of Jericho, Ptolomey, who arranged a banquet for his two sons and his father-in-law Simon, the high priest, and proceeded to murder them. This division is for murderers of guests. Friar Alberigo is mentioned as the example of a murderer of guests. Much like Ptolemy, Alberigo had his guests murdered at a banquet. The final division of the ninth circle is for murderers of lords and benefactors and is named for Judas Iscariot and is called Giudecca. This is the only area of h**l not exemplified by a historical or mythological figure with which Dante speaks. The punishment found in the ninth circle is submersion in ice. The symbolism shown here relates to the cold-bloodedness of these sins. Each sinner found in the ninth circle has turned a warm trust into a frigid mistrust and must forever contemplate the harshness of their acts. Dante's Inferno is a religious allegory telling of mankind's journey into the downward spiral of sin and ultimately h**l. The symbolic relationships between individual sins and the eternal and certain punishment are presented in a way as to warn mankind of the dangers of sin and the merits of absolution. Dante cites now-historical and mythological figures to exemplify the sins and to make for the better understanding of sin to even the most inept of readers. This work stands alongside The Bible as one of the greatest religious-literary masterpieces of all time. ...read more.