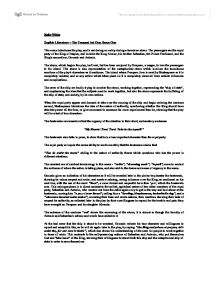 The Tempest Act One, Scene One - review

Holly White English Literature - The Tempest Act One, Scene One This scene introduces the play, and is set during on a ship during a ferocious storm. The passengers are the royal party of the King of Naples, and include the King Alonso, his brother Sebastian, the Prince Ferdinand, and the King's counsellors, Gonzalo and Antonio. The storm, which begins the play, isn't real, but has been conjured by Prospero, a magus, to lure the passengers to his island. This storm is also representation of the metaphorical storm which involves the tumultuous emotions of the play's characters as it continues. The island where Prospero lives is used by Shakespeare as it is completely isolated, and so any action which takes place on it is completely removed from outside influences and complications. The crew of the ship are busily trying to combat the storm, working together, representing the "ship of state", and emphasising the idea that the subjects need to work together, but also the storm represents the buffeting of the ship of state, and society, by its own actions. ...read more.

The constant use of nautical terminology in this scene - "cabin", "drowning mark", "topsail", serve to remind the audience of where the action is taking place, and also add to the drama and sense of urgency in the scene. Gonzalo gives an indication of his characters as it will be revealed later in the plot as he placates the boatswain, showing he values respect and order, and exerts a calming, caring influence over the King, as continued on his next line, with the use of the word "thou", a more formal and respectful term than 'you', which the boatswain uses. This calm goodness is in direct contrast to the selfish, egoistical nature of two other members of the royal party, Sebastian and Antonio, who venture out from the cabin again only to get in the way and hurl abuse at the boatswain, cursing him "a pox o'your throat", calling him a "bawling, blasphemous, incharitable dog", and a "whoreson insolent noise maker", revealing their base ...read more.

Gonzalo's lines finish the scene, showing again his willingness to accept his fate with courage "The wills above be done, but I would fain die a dry death". Therefore this scene is very effective in introducing the themes, such as the ship of state, and how a person's actions reflect it, and the nature of authority, and how power can be used well or abused. Another symbolism introduced here and prevalent through the play is the storm, as it introduces the play as being quite turbulent, not only in the action of the actual storm itself, but also that the emotions of the characters in the play will also become very chaotic. It also introduces the characters and hints at their true natures - it shows the King to be used to being in charge, and very authoritarian, his brother Sebastian and Antonio to be selfish and rude, but Gonza to be kind and respectful, as reflected in the rest of the play. ...read more.