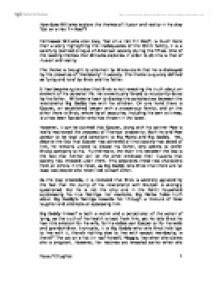 Tennessee Williams epic play, 'Cat on a Hot Tin Roof', is much more than a story highlighting the inadequacies of the Pollitt family, it is a carefully planned critique of American society during the fifties. One of the leading themes that Williams explores in order to do this is that of illusion and reality. The theme is brought to attention by Bricks claim that he is dismayed by the presence of 'mendacity' in society. The theme is quickly defined as 'lying and liars' by Brick and his father. It has become quite clear that Brick is not revealing the truth about an element of his personal life. He is eventually forced to reluctantly do so by his father. Williams is keen to display the complexities between the relationship Big Daddy has with his children. On one hand there is Gooper, an established lawyer with a prosperous family, and on the other there is Brick, whom by all accounts; including his own at times, is a has been footballer who has thrown in the towel. ...read more.

Big Daddy himself is both a victim and a perpetrator of the action of lying, as the truth of his health is kept from him, yet he tells Brick he has little emotion for his wife, for his eldest son Gooper or for his wide and grandchildren. Ironically, it is Big Daddy who tells Brick he's 'got to live with it, there's nothing else to live with except mendacity, is there?" The cat on a hot tin roof herself; Maggie, lies when she claims she is pregnant. However, her motives are revealed earlier when she claims "you can be young without money, but you can't be old without it", in regards to Bricks proposed inheritance of Big Daddy's plantation. However, upon occasions it becomes difficult to differentiate between elements of illusion and reality within the play. This is due to the fact that each member of the family views others through their own egos. For example, Brick seems shocked when Maggie says she loves him, saying 'wouldn't it be funny if that was true', but this could be because he is unresponsive and apathetic towards her, she too must be towards him. ...read more.

. . clean and decent". In stark contrast, we learn that Big Daddy's tolerance stems from the fact that he has 'lived with too much space around me to be infected by ideas of other people'. In actual fact, it is difficult, perhaps impossible to determine Bricks sexuality. But undoubtedly, it is clear that the themes of illusion and reality have played a central role in building his negative perception of homosexuals. Williams purposely leaves the subject fraught with uncertainty, perhaps in order for the audience to decide how much of a psychological burden it has been on Brick life. By way of conclusion, Williams explores the themes of illusion and reality through a variety of techniques, including a number of other themes which seamlessly synchronize with the basics of the main storyline. These ideas are relayed to the audience through the troubled character of Brick, who highlights the perception of illusion and reality in 1950s America. ?? ?? ?? ?? How does Williams explore the themes of illusion and reality in his play 'Cat on a Hot Tin Roof'? 1 Yousuf Chughtai ...read more.