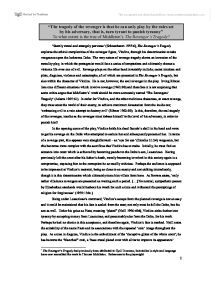 &quot;The tragedy of the revenger is that he can only play by the rules set by his adversary, that is, turn tyrant to punish tyranny&quot; To what extent is the true of Middleton's The Revenger's Tragedy?

"The tragedy of the revenger is that he can only play by the rules set by his adversary, that is, turn tyrant to punish tyranny" To what extent is the true of Middleton's The Revenger's Tragedy? 'Sternly moral and strangely perverse' (Schoenbaum 1955:6), The Revenger's Tragedy explores the ethical complexities of the revenger figure, Vindice, through his determination to take vengeance upon the lecherous Duke. The very nature of revenge tragedy shows an inversion of the morality play, in which the protagonist would face a series of temptations and ultimately choose a virtuous life over one of evil. Revenge plays on the other hand invariably include; secret murders and plots, disguises, violence and catastrophe, all of which are presented in The Revenger's Tragedy, but also within the character of Vindice. He is not, however, the soul revenger in the play. Irving Ribner lists nine different situations which involve revenge (1962:80) and therefore it is not surprising that some critics argue that Middleton's1 work should be more accurately named 'The Revengers' Tragedy' (Adams 1965:61). In order for Vindice, and the other malicious characters, to exact revenge, they must enter the world of their enemy, to achieve maximum devastation from the inside out; 'embracing evil in a vain attempt to destroy evil' (Ribner 1962:80). Is this, therefore, the real tragedy of the revenger, insofar as the revenger must debase himself to the level of his adversary, in order to punish him? In the opening scene of the play, Vindice holds his dead fianc�e's skull in his hand and vows to get his revenge on the Duke who attempted to seduce her and subsequently poisoned her. ...read more.

which leads him to a dangerous resolve, 'to try the faith of both' (I.III.177). Although his asides show some regret for his actions, 'Not, I hope, already?' and 'I e'en quake to proceed' (II.I.104, 109), Vindice appears to continue his persuasion with little further thought on the matter. Later, when he decides to punish, and almost take revenge, on his own mother for agreeing to Castiza's prostitution, Vindice exhibits some of his most morally disturbing behaviour by Elizabethan standards. Gibbons notes that 'in a society where parental authority was so strong, a parent's submission to a child was a deep and disturbing breach of custom' (1992:88n) and the image of Hippolito and Vindice either side of their mother, presumably with weapons, is almost a direct parallel of the way in which the brothers handle the Duke: 'Nail down his tongue, and mine shall keep possession / About his heart' (III.V.193-4). This can be viewed symbolically where Vindice must, for his own satisfaction, kill the 'heart' and perform psychological torment, by showing the Duke his wife and son together. It could be argued that it is this image that kills the Duke. As his next target, the murder of Lussurioso must, of course, out do the death of the Duke, despite his reasoning being less substantial. To get his change however, Vindice must now become himself and is hired to kill 'Piato'. This symbolism releases Vindice of all mental guilt, as it allows him not only to re-enact his killing of the Duke, but also stabbing the image of himself pushes him further into the 'manic glee' (Brooke 1979:25) ...read more.

By the close of the play, the audience come to the realisation that 'those who seek justice are no less corrupted than those who seek sensual pleasure or power' (Murray 1964:228). It is impossible, however to align Vindice with the "tragic hero" character, as though despite his admittance, he fails to achieve 'self-knowledge' and 'he amuses himself and us so much ... he seems incapable of suffering and inner conflict' (Ribner 1986:151). Through the enjoyment and gratification in the deaths and violence, Vindice's confession comes to nothing. He does not argue for forgiveness or try and show his regret but merely accepts that ''tis time to die when we ourselves are foes' (V.III.112). Peter Murray argues that Vindice is one of the more 'believable portraits of neurotic perversion in all of Jacobean drama' and therefore the ways in which he evolves as a character is truly accurate to reality (1964:247). Can therefore, turning tyrant really be Vindice's tragedy, if any other character would have come to the same fate? 'It is worth remembering that death is what we commonly expect at the end of a revenge tragedy' and Middleton simply alters the normal style of the close of a revenge play. In showing Vindice's lack of self-recognition, the audience would leave the theatre with a 'particular sense of imperfection' (Ribner 1962:86). The tragedy of the revenger then, is not that Vindice has turned tyrant, but that he represents everyman, and in allowing oneself to be consumed with rage, desire and l**t, every one of us would come to the same fate. Vindice does not realise that he has become the b**t of his own joke; Lussurioso sought to hire a villain, and he succeeded. ...read more.