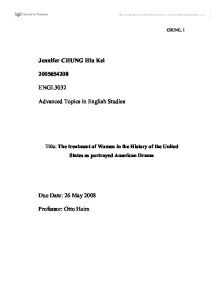 Jennifer CHUNG Hiu Kei 2005654208 ENGL3032 Advanced Topics in English Studies Title: The treatment of Women in the History of the United States as portrayed American Drama Due Date: 26 May 2008 Professor: Otto Heim Contents 1. Introduction and Background Page 30 2. Role of Women in American Society Page 13 3. Assimilating as a Woman Page 33 4. Conclusion Page 42 5. Bibliography Page 43 Chapter 1: Introduction and Background Drama is one of the quintessential attributes of English literature and to a certain extent, perhaps one of the more powerful categories as drama has the advantage of extra visuals to connect with the viewers than poetry or novels. With the influential element of props and actions performed with dialogue in scenes and acts, the ending segment of the texts often create a much more personal response among viewers in the form of 'catharsis'. Defined by Aristotle in Poetics at around 350 B.C, he structured tragic plays into four stages: hamartia, hubris, anagnorisis, and lastly catharsis. The first three stages illustrate the tragic hero, who is often the protagonist in the plays, with a flawed personality of some sort which is responsible for their downfall from a high status in their society. Catharsis on the other hand has more to do with the purging of emotions which cause the viewer to experience two particular feelings, pity and sorrow, triggering the sensation of a moving ending, one which lingers on their mind as they continue to reflect on the plot. While the ending written by the playwright may have been an active and conscience move to create a powerful ending to lure the viewer into enjoying the production and desiring to seek more, there is a certain pattern of endings. In most cases the tragedies end in death for the tragic hero, or at the very least, a drastic plummet in social status and reputation, but there is also a trend observed for women in the plays. ...read more.

As a result, Frank completely depends on Winnie's share of the land and shamelessly attempts to cheat her out of the money. "This is the chance we've been waiting for. A chance for me to get back on my feet. To show my brothers I don't need their money." (Cleage, 712). This scene is particularly intriguing as Frank jeers at his brothers and declares independence from them and their money, yet ironically, he does so by automatically taking ownership of his wife's money to recover from the decline of hope and monetary support. Frank's behaviour not only confirms that he cannot succeed as the breadwinner in the family, but is also unashamed of entirely relying on and taking advantage of his wife. In Bitter Cane, Li-Tai does work and provide for herself and so she is financially stable as the men working on the sugar cane plantations are often lonely and want company from the opposite gender. As a result, the occupation that Li-Tai employs does not respect herself as a woman. Instead, she is viewed as more of an objectified service, and ultimately the source of her financial stability relies heavily on men. This indicates the difficulty that women face as they strive to become self-sufficient and how there are very few options available for woman to achieve this. In light of this overbearing obstacle, it also raises the question to the reader of whether it is better for women to accept the dominance of men holding the higher if not sole paycheck and simply rely on them or to abstain from their care and protection in the form of money. Li-Tai is also emotionally attached to men, first Lau and then Wing. She tries to hide her feelings and not let it distract her from her work and will to survive around most of the men on the sugar plantations, but she has a particular vulnerability when it involves Lau and Wing. ...read more.

Most of the women in the plays lack the ability to assimilate successfully in the societies. This is in part because they do not live up to the expected roles constructed by the societies that they live in from the beginning. While some do not take on the difficult challenge of attempting assimilation in hopes of bridging a better life, others strive in this direction, only to fail. This failure often results in a broken spirit to fight and continue with their lives. We do however see in some cases of the plays where the women accept this and does not allow the overbearing failure affect the rest of their lives, and instead they look ahead and concentrate on how to live in the situation they are in. On the whole, the unsuccessful attempt in integration crystallizes the theme of isolation experienced by women. Chapter 4: Conclusion Women often tend to be in a negative position by the end of the plays. As hypothesized, they often mellow in their isolation from other characters or society, feel trapped in their subordinate marriages, unable or unwilling to break out of it, and worse of all, experience death physically or mentally. The women also have very little chance of breaking out of this cycle of doom for them as the society they are in often prevents them from doing so. Straying from the expected roles which bring them misery and unworthiness contributes more to the isolation, subordination in marriage and death. However, a particular aspect to note from the research project is that these themes of isolation, subordination in marriage and death do not necessarily occur at the ending of the plays. In many of the plays, the women conclude with the same status or level of isolation as the starting of the plays. This suggests that there is extremely little opportunity from the very beginning for them to improve their positions in society and their lifestyles. Such a bleak outlook confirms the struggle to steer away from the 'inevitable' outcomes deemed acceptable for women in American drama. ...read more.