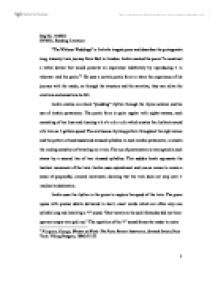 The Whitsun Weddings&quot; is Larkin's longest poem and describes the protagonists long, leisurely train journey from Hull to London. Larkin wanted the poem &quot;to construct a verbal device that would preserve an experience

Reg No. 546692 EN1021, Reading Literature "The Whitsun Weddings" is Larkin's longest poem and describes the protagonists long, leisurely train journey from Hull to London. Larkin wanted the poem "to construct a verbal device that would preserve an experience indefinitely by reproducing it in whoever read the poem.1" He uses a certain poetic form to share the experience of his journey with the reader, so through the structure and the narrative, they can relive the emotions and sensations he felt. Larkin creates an almost "plodding" rhythm through the rhyme scheme and his use of iambic pentameter. The poetic form is quite regular with eights stanzas, each consisting of ten lines and rhyming a b a b c d e c d e which creates the rhythmic sound of a train as it gathers speed. The continuous rhyming pattern throughout the eight verses and the pattern of unstressed and stressed syllables in each iambic pentameter, re-enacts the rocking sensation of traveling on a train. The run of pentameters is interrupted in each stanza by a second line of two stressed syllables. This sudden break represents the hesitant movement of the train. Larkin uses enjambment and run-on verses to create a sense of purposeful, onward movement, showing that the train does not stop until it reaches its destination. ...read more.

He personifies the heat of the humid afternoon, "All afternoon, through the tall heat that slept/For miles inland/ A slow and stopping curve southwards we kept." Larkin manages to make the rhyme in the poem unobtrusive to the reader by using small, unimportant words, for example "slept" and "kept." The internal rhyme scheme of "all" and "tall" suggests a feeling of humidity and sluggishness and the alliteration of the "s" sound adds to the sleepy atmosphere. In the Reg No. 546692 EN1021, Reading Literature first two stanzas Larkin sets the scene of a lazy summer's day. The poem is narrated in an unhurried, relaxed style and his colloquial tone gives the poem a content, peaceful atmosphere as he describes the surrounding countryside, "All windows down, all cushions hot, all sense/Of being in a hurry gone" This evocative phrase creates a feeling of a peaceful, content country and the reader can visualise the narrator settling himself down to tell a story. Throughout the poem Larkin engages the reader by appealing to all their senses, "of blinding windscreens, smelt the fish dock." Larkin uses incredibly visual imagery and each stanza contains elaborate and tightly packed detail, "The river's level drifting breadth began/Where sky and Lincolnshire and water meet." ...read more.

The poem can be interpreted as a metaphor for a personal journey. Larkin begins his account with visual observations which lead him to make social criticisms and finish with philosophical contemplation. When Larkin realises that it is Whitsun, a traditional occasion for weddings, it leads him into a series of meditations on the many courses life can take. There is a significant shift from description to reflection in the final stanza "and none/Thought of the others they would never meet/Or how their lives all contain this hour." The mood becomes sombre as the isolated narrator ponders the significance of what he has observed. The happy couples will never meet again as they leave the train and go their separate ways. They offer a strong contrast to the narrator as they appear too Reg No. 546692 EN1021, Reading Literature merry and excited (or perhaps, according to Larkin, too working class) to be reflective, unlike the philosophical poet. In conclusion, Larkin's use of poetic form and his handling of the narrative have many different purposes and are very effective. He uses them to bring alive the remarkable sights one encounters on a train journey, and recall the emotions and sensations of a personal and significant moment in his life to share with the reader. ...read more.