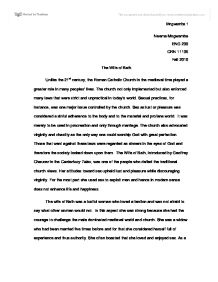 The Wife of Bath

Neema Mngwamba ENG 230 CRN 11136 Fall 2010 The Wife of Bath. Unlike the 21st century, the Roman Catholic Church in the medieval time played a greater role in many peoples' lives. The church not only implemented but also enforced many laws that were strict and unpractical in today's world. Sexual practices, for instance, was one major issue controlled by the church. Sex as lust or pleasure was considered a sinful adherence to the body and to the material and profane world. It was merely to be used in procreation and only through marriage. The church also advocated virginity and chastity as the only way one could worship God with great perfection. Those that went against these laws were regarded as sinners in the eyes of God and therefore the society looked down upon them. The Wife of Bath, introduced by Geoffrey Chaucer in the Canterbury Tales, was one of the people who defied the traditional church views. Her attitudes toward sex upheld lust and pleasure while discouraging virginity. For the most part she used sex to exploit men and hence in modern sense does not enhance life and happiness. The wife of Bath was a lustful woman who loved attention and was not afraid to say what other women would not. ...read more.

Furthermore, the wife of Bath used sex to exploit men. She used her body as an instrument in order to gain control or sovereignty over her husbands. She loved power as she boldly bragged in line 226, "So well I ruled them, by my law and sentence..." She believed women desire complete control over their husbands and for a marriage to work they have to have it. She arrogantly explained how she manipulated her first three rich husbands by teasing them in bed to the point that they would give her money and gifts. (Husband number four couldn't be controlled as much, perhaps because he had a mistress.) The wife of Bath knew what men wanted and thus used her body effectively to achieve her goals and get whatever she wanted whether is was monetary gift, attention or control. In lines 205-210 and again in lines 409-414, detailing her evil behavior, she said "In bed they met their grief in fullest measure. There I would scold; I would not do their pleasure....Till he agreed to square accounts and pay..." This was her major reason she used sex to her three husbands of whom she never loved. Ironically, the very thing that she used to control her husbands ended up controlling her when she married husband number five. ...read more.

For instance, when she tried to defend her point of multiple marriages, she gave a bible example of a Samaritan woman. After explaining what Jesus said to this Samaritan woman, the wife of bath admitted in line 20, "But what he meant is more than I can say." Her love of attention caused her to say things without thoroughly thinking about them. She also contradicted herself when she claimed to love sex, but only used it to manipulate men and pleasure men but not herself. She was weak as well in a sense that she could not leave her husband even though he was abusive. Love made her weak. Even in today's' society many strong independent women are weak when it comes to love, and therefore continue to stay in abusive relationships. Physical abuse to women is one of the major things feminists fight against. In conclusion, though the medieval society regarded the wife of Bath's sexual attitudes as unconventional and though her methods were solely for her own benefits, she was not entirely hopeless. She was courageous enough to stand up for what she believed as supposed to the many who just follow whatever law there is. One other thing is that, despite the fact that she was obviously not a feminist, she unknowingly maintained one feministic view, which is sexual freedom. ?? ?? ?? ?? Mngwamba 1 ...read more.