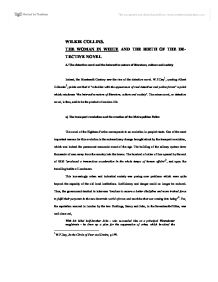 The Woman In White and the birth of the detective novel.

WILKIE COLLINS. THE WOMAN IN WHITE AND THE BIRTH OF THE DETECTIVE NOVEL A/ The detective novel and the interactive nature of literature, culture and society Indeed, the Nineteenth Century saw the rise of the detective novel. W.P.Day1, quoting Albert D.Hunter2, points out that it "coincides with the appearance of real detectives and police forces" a point which reinforces "the interactive nature of literature, culture and society". The crime novel, or detective novel, is thus, said to be the product of modern life. a) The transport revolution and the creation of the Metropolitan Police The novel of the Eighteen-Forties corresponds to an evolution in people's taste. One of the most important reasons for this evolution is the extraordinary change brought about by the transport revolution, which was indeed the paramount economic event of the age. The building of the railway system drew thousands of men away from the country into the towns. The hundred of miles of line opened by the end of 1850 "produced a tremendous acceleration in the whole tempo of human affairs"3, and upon the travelling habits of Londoners. This increasingly urban and industrial society was posing new problems which were quite beyond the capacity of the old local institutions. Inefficiency and danger could no longer be endured. Thus, the government decided to intervene "anxious to secure a better discipline and more trained force to fulfil their purposes in the new incertain world of town and machine that was coming into being"4. For, the reputation secured in London by the two Fieldings, Henry and John, in the Seventeenth-Fifties, was well deserved, With his blind half-brother John - who succeeded him as a principal Westminster magistrate - he drew up a plan for the suppression of crime, which involved the organization of London's first effective force.5 In the novel we are studying, Walter's defence reaction at his first meeting with the woman in white is representative of the feeling of insecurity which reigns over London. ...read more.

b) Walter and his opponents: an unequal challenge From the outset we know that Walter and the two women have "no mercy to expect from Count Fosco and Sir Percival Glyde" (452). Then, it is clear that his investigation exposes him to the determination of his enemies who obstruct him, one by trickery, and one by threat. Such are the enduring rules of the game in detective stories. Fosco, who is the master of crime, is an incredible creation, who can but rarely be found in detective fiction. This man, who confesses that he "personally resembles Napoleon the Great" (615) in his skill to plan out the conspiracy as if a military campaign, openly advocates crime. He criticizes the police efficiency in crime hunting, asserting that "Good criminals" (256) remain out of their reach. He gives a description of the detective novel long before it had been coined: ' The hiding of a crime, or the detection of a crime, what is it? A trial of skill between the police on one side, and the individual on the other.' (256) Here is, indeed, the general outline of Walter's narrative as it depicts a trial of skill between himself and the two criminals. Fosco organizes his crime as a mere game worthy of a chessplayer. Thus, he considers "the first move in the game" (625), then thinks about "the second move" (620). Finally, an "immense conception" (620) awakens in his mind with the "whole force" (620) of his intelligence, the details of which occur to him in "all their masterly combination" (621). Like his fellow criminals in subsequent fiction, he is merciless and prepared to kill for money. If Anne Catherick "had not died when she did" (632) he, indeed, "should have [...] extended to the captive [...] a happy release" (632). Like them he is endowed with weak point. It is not yet alcoholic addiction or gambling. ...read more.

The whole story is conditioned by her destiny. Such is the way a detective story is written. However, Walter does not exploit enigmatic remarks and actions. He only attaches importance to facts and evidence. Neither is he challenging us to a battle of wits, as we never yield to the temptation to match our own shrewdness against his. It is clear, also, that physically Walter has no consistency. He is deprived of any distinctive and characteristic feature inherent to the ensuing detectives in fiction. Sergeant Cuff, in The Moonstone, is, indeed, the first of a long line of this type of hero, who is an "admirable mingling of fact and fancy"29 so typical of it. Finally, Walter does not possess an essential detail: the eagle eye that allows the detective to see farther than we do. Only Collins' next hero will be endowed with eyes "of a steely light grey" which: had a very disconcerting trick, when they encountered your eyes, of looking as if they expected something more from you than you were aware of yourself"30 As there is no trace of these aspects that are the essence of the detective novel, The Woman in White, nevertheless, undeniably possesses some of its most characteristic features. And we side with J.M.Stewart when he says that in comparison with the contemporary 'thrillers', which does not really take into consideration the reader's interest in the elucidation of a crime, "the resources of Wilkie Collins are [...] inexhaustible"31. As he focuses his attention on the plot of the novel rather than on the sensational events, he manages to make it "as closely-knit and logical as the plot of a classical drama [...]. One has only to read The Woman in White, The Moonstone, to realise how great and necessary this innovation was."32 Subsequent detective novel writers were, indeed, influenced by Collins. We recognize the debt owed to him by writers of the standing of Dorothy Sayers and Raymond Chandler. 1W.P.Day, In the Circle of Fear and Desire, p.199. -- ...read more.