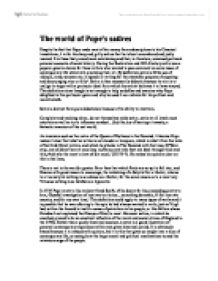 The world of Pope's satires

The world of Pope's satires Despite the fact that Pope made most of his money from subscriptions to his Classical translations, it is for his sharp and gritty satires that he is best remembered and justly revered. It is these that proved most entertaining and that, in literature, remained pertinent personal accounts of social history. During the Restoration and 18th Century satire was a popular generic choice for those writers who wanted to pass comment on some issue of contemporary life whilst still practicing their art. By definition satire is �the use of ridicule, irony, sarcasm etc. in speech or writing for the ostensible purpose of exposing and discouraging vice or folly�. Satire is then necessarily didactic because its aim is to realign its target with a particular ideal from which the satirist believes it to have strayed. This definition alone though is not enough to help us define and examine why Pope delighted in this particular genre and why he used it as a vehicle for his political and moral beliefs. Satire is distinct from pure didacticism because of its ability to entertain; Complaint and teaching alone...do not themselves make satire...satire at all levels must entertain as well as try to influence conduct... (by) the joy of hearing a travesty, a fantastic inversion of the real world. An inversion such as the realm of the Queen of Dullness in the Dunciad. Likewise Pope makes it clear that what he writes is not slander or lampoon, which is what litters the texts of the Grub Street writers, and which he attacks in The Dunciad with the lines, �"Here strip, my children! here at once leap in,/Here prove who best can dash through thick and thin,/And who the most in love of dirt excel,� (II 275-7). He makes his opinion clear on this in the lines; There is not in the world a greater Error than that which Fools are so apt to fall into, and Knaves with good reason to encourage, the mistaking ...read more.

The motive for these tactics are nicely explained by the hack writer Ned Ward; I borrowed my method from our Moorfield�s conjurors, who use their utmost art to put on a terrible countenance, that everybody that gazes on their outsides may think the devil is in them; and they undoubtedly find it a useful policy, for I have commonly observed, that he thrives best, and has his door most crowded, that can look the most frightful. The results were largely empty promises of something fantastic and in themselves insubstantial and weak. The formats in which these kinds of writings flourished saturated the literary world making it easy to vent personal gripes in the press. All these things provided Pope with ample provocation to write responsive and often defensive satire. The Dunciad is the best known and most comprehensive attack on these issues. The hacks cry �The more we rail, the more bespatter,/�Twill make our pamphlets sell the better.�, was justly answered by the mud slinging scene in Book II of the Dunciad. Pope is likewise critical of the huge range of cheap pamphlets and periodicals that delighted in such scandal and gossip, which he again attacks in the Dunciad; Hence miscellanies spring, the weekly boast Of Curll�s chaste press, and Lintot�s rubric post: Hence hyming Tyburn�s elegaic lines, Hence Journals, Medleys, Merc�ries, Magazines: Sepulchrul lies, our holy walls to grace, (I 39-43) Pope further presses this point when, within the footnotes of the Dunciad he has his fictitious critic Martin Scriblerus comment on the word �Magazines�; Miscellanies in prose and verse, in which at some times - new born nonsense is first taught to cry; at others, dead - born Dullness appears in a thousand shapes. These were thrown out weekly and monthly by every miserable scribbler; or picked up piece-meal and stolen from anybody, under the title of papers, essays, queries, verses, epigrams, riddles, etc. ...read more.

In the Advertisement at the beginning of Epistle to Dr Arbuthnot Pope quite explictly states his irritation at these kinds of personal attack on, �my person, morals, and family, whereof to those who know me not, a truer information may be requisite.� The lamentable state of contemporary English Society, which Pope felt had become morally degenerate as a result of the temptations of vice, was sufficient to prompt a response from Pope. At the end of his Epilogue to the Satires: Dialogue One, he comments on just this; In golden chains the willing world she draws,/And hers the gospel is, and hers the laws,/Mounts the tribunal, lifts her scarlet head,/And sees pale Virtue carted in her stead./Lo! at the wheels of her triumphal car,/Old England�s genius, rough with many a scar,/Dragged in the dust! his arms hang idly round/His flag inverted trails along the ground!/Our youth, all liveried o�er with foreign gold,/Before her dance: behind her, crawl the old!/See thronging millions to the pagod run,/And offer country, parent, wife or son!/Hear her black trumpet through the land proclaim,/That �not to be corrupted is the shame�.... Yet may this verse (if such a verse remain)/Show, there was one who held it in disdain. (147-172) In short things conspired to prompt Pope to turn to satire, a genre in which he would endeavour �to correct the taste of the town in wit and criticism.� Despite Swift�s warning that in exposing the follies of his enemies, Pope may cement their place in history saying, �and as to the difference between good and bad fame, it is a perfect trifle� , Pope�s response was one of defiance, �I think a bright author should put an end to slanders only as the sun does to stinks - by shinning out exhale them to nothing.� Thus, quite apart from letting these matters go, it seemed almost an obligation to Pope to expose the vice and poor taste of his enemies, and in doing so treat them to an example of elegant rhetoric in the form of a satire. ...read more.