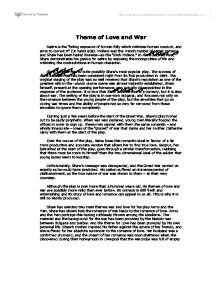 Theme of Love and War.

Theme of Love and War Satire is the "biting exposure of human folly which criticizes human conduct, and aims to correct it" (Di Yanni 839). Moliere was the French master of satiric comedy, and Shaw has been hailed likewise--as the "Irish Moliere." In Arms and the Man, Shaw demonstrates his genius for satire by exposing the incongruities of life and criticizing the contradictions in human character. Arms and the Man is quite possibly Shaw's most popular play. The success of Arms and the Man has been consistent right from its first production in 1894. The original staging of the play was so well received that Shaw's reputation as one of the greatest wits in the London drama scene was almost instantly established. Shaw himself, present at the opening performance, was actually dissappointed in the response of the audience. It is true that Arms and the Man is a comedy, but it is also about war. The setting of the play is in war-torn Bulgaria, and focusses not only on the romance between the young people of the play, but the atrocities that go on during war times and the ability of people not so very far removed from these atrocities to ignore them completely. ...read more.

However, by the play's end, Shaw is eager to reveal that all is not as it seems with any of the characters, especially with Raina. The audience knows it, and the characters learn the truth, too. When Sergius discovers the facts about his fianc�e, he exclaims, "'You love that man! . . . You allow him to make love to you behind my back, just as you treat me as your affianced husband behind his'" (1329, act 3). Later, he comes to the realization that their "romance is shattered. [And] Life's a farce" (1330, act 3). It almost seems as though the playwright himself is saying this line; he speaks them to the audience as directly as if he were on stage. For Shaw often stocked his plays "full of lines in which the characters explode romantic elusions" (Ervine 269). Love, though, is not the only concept around which romanticism abounds. The other point that Arms and the Man seeks to make is that war, too, has been idealized. The perspective that most of the characters have on war is practically mythology. The first scene depicts Raina and her mother, and their morbid excitement over the latest battle. ...read more.

in Ervine 268, emphasis mine), and he does not want the audience of Arms and the Man to be, either. Shaw has mocked at hero-worshipping and sees nothing Platonic about Love also. He tries to prove that Love too is a mere biological need of us and not a spiritual one. Thus he has tried to present the contrast between Romantic and the Real. The play has two themes love and war and both are universal. Romantic notions about war need to be cured as much today as much as in 1890's. The suffering caused by the two world wars has convinced all those who can think that war has to be abandoned, if humanity is to survive. As our age is a nuclear age, and the age of missiles hence the message of the play is more significant which has kept and is still keeping the play as alive as it was at the time of its birth. The second universal theme of love is again significant, just as war blinds the man; love too blinds him and makes him incapable to see the reality. As after effects of war are terrible, similarly after effects of 'idealistic romantic love' are also terrible. Thus the play presents the reality of love and war and makes us feel it. ...read more.