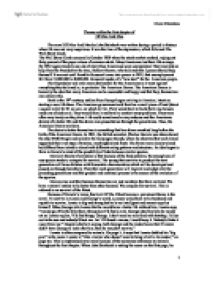 Themes within the first chapter of Of Mice And Men

Themes within the first chapter of Of Mice And Men The novel Of Mice And Men by John Steinbeck was written during a period in history when life was not very auspicious. It was the time of the depression, which followed The Wall Street Crash. The Wall Street Crash occurred in October 1929 when the stock market crashed, wiping out forty percent of the paper values of common stock. Many Americans lost their life savings. By 1932 approximately one out of every four Americans were unemployed. They received no help from the President at the time, Herbert Hoover, who believed that a person should help themself. It was not until Franklin Roosevelt came into power in 1932, that unemployment fell from 13,000,000 to 8,000,000. Roosevelt spoke of a "new deal" for the American people. The Depression was even more detrimental for the Americans as it went against everything they believed in, in particular The American Dream. The American Dream is basically the idea that every American can be successful and happy and that they, themselves can achieve this. Back in the 19th century, settlers from Europe began arriving in America, intent on starting a new life there. The American government sold families a small piece of land (about a square mile) for $1 an acre, on which to live. ...read more.

I don't need no nice food with ketchup. I'd lay out in the sun and nobody'd hurt me. An' if I found a mouse, I could keep it. Nobody'd take it away from me." Despite what he's saying, both George and the reader know that if Lennie didn't have George to look after him, then he wouldn't survive." Lennie is often compared to animals. On page 5, it says that Lennie dabbled his "big paw" in the water. Lennie is "Like a terrier who doesn't want to bring a ball to its master," on page ten. This is emphasised even more because of the numerous references to animals throughout the first chapter. When John Steinbeck is setting the scene on the first page, he refers to the rabbits who "come out of the brush to sit on the sand in the evening" and "the night tracks of 'coons." George however, is the opposite of Lennie, being small and quick. Despite his form, he seems more able to survive in the world he lives in. This leads on to the theme of The American Dream. At the very beginning of the novel, as John Steinbeck is setting the scene on the first page, he mentions the Gabilian mountains and in the way he describes it, he seems to draw comparisons with the American Dream. ...read more.

Jus' strokin' it." He likes things he can pet but George reminds him of the times he killed the mice his Aunt Clara gave him. Lennie protests that this was not his fault, when he says, "They were so little. I'd pet 'em and pretty soon they bit my fingers and I pinched their heads a little and then they were dead- because they were so little." This is the first sign of violence in the book. Also, it foreshadows that something bad will happen, connected to Lennie's love of petting things. Foreshadowing is a technique used throughout the first chapter to point you to things that will happen in the story. On page 13, George reminds Lennie of the time he felt a girl's dress, "How the h**l, did she know you jus' wanted to feel her dress? She jerks back and you hold on like it was a mouse." This tells you that Lennie is going to get into trouble because of petting something. Also, when George tells Lennie to hide in the brush till he comes for him if he gets into trouble, we know that Lennie is going to get into trouble and will have to hide in the brush eventually. John Steinbeck raises many themes in the first chapter of his novel and he uses effective methods to do so. ?? ?? ?? ?? Claire Chambers 1 ...read more.