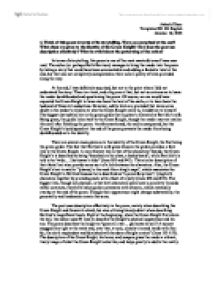 Think of this poem in terms of its storytelling - Were you surprised at the end? What clues are given to the identity of the Green Knight? How does the poet use description effectively? What is artful about the patterning of the action?

4. Think of this poem in terms of its storytelling. Were you surprised at the end? What clues are given to the identity of the Green Knight? How does the poet use description effectively? What is artful about the patterning of the action? In terms of storytelling, this poem is one of the most masterful ones I have ever read. The author (or perhaps Keith Harrison) manages to bring the reader into the poem by taking a story that could have been unremarkable and adding a fantastic twist at the end, but that was not completely unexpected as there were a plenty of hints provided along the way. At the end, I was definitely surprised, but not to the point where I did not understand the story. There is a twist, and a big one at that, but not so extreme as to leave the reader dumbfounded and questioning the poem. Of course, no one would have expected the Green Knight to have also been the host of the castle, or to have been the husband of Gawain's seductress. ...read more.

The biggest link, though not physical, is that both characters seem have a proclivity towards verbal contracts; they both make spoken covenants with Gawain, which eventually overlap at the end of the poem. Though their appearance might change substantially, the personality and tendencies remain the same. The poet uses description effectively in the poem, mainly when describing the Green Knight and Gawain's shield, but also utilizing bloody detail when describing Bertilak's magnificent hunts. Right at the beginning, when the Green Knight first enters the hall, the author uses 83 lines to describe the Knight's physical appearance and his axe. The poem describes the knight as "green all over... garments as well! A surcoat snugged him tight at the waist and, over that, a tunic, closely trimmed inside with fine fur, the cloth resplendent and furnished with borders of bright ermine" (lines 151-155). The description of the Green Knight, his horse, and weapon gives the reader a vibrant, lively image of what the Green Knight looks like, and helps greatly to add to the reality of a scene which would be improbable without the details. ...read more.

They kept a tidbit for the crows, tossed it into the trees, then rent a hole in the full flanks near the ribs and hung the beast from branches by the hocks" (lines 1353-1357). Again, this gory detail helps to add to the realism of the scene and make it more than just ink arranged on a piece of paper. The patterning of action in this story is truly artful. The author takes the standard, predictable plot diagram and manages to arrange the story so that climax falls right at the end of the poem, with the only falling action being the Green Knight's clarification of the previous three days to Gawain. Inadvertently making up for the lack of falling action is the all the action that leads up to the Green Knight's revelation to Gawain: the close encounters (literally) of Gawain and the lady of the castle, Bertilak's hunting scenes, and Gawain's brush with death before being enlightened by the Green Knight. All this action, along with the vivid descriptions discussed above, make the reader anxious to arrive at the end of the story and get the jumble of characters introduced earlier elucidated by the Green Knight into a comprehensible tale of honor, deception, and death. Aakash Dheer Tompkins IB1 HL English October 19, 2003 ...read more.