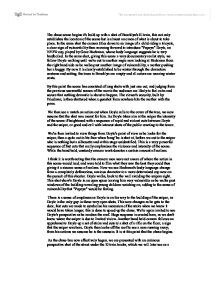 This shot show's Doyle in an open space leaving him very vulnerable as he walks past windows of the building revealing young children watching on, adding to the sense of vulnerability that &quot;Popeye&quot; would be feeling.

The chase scene begins it's build up with a shot of Brooklyn's El train, this not only establishes the location of the scene but is almost an omen of what is about to take place. In the same shot the camera titles down to an image of a child riding a tricycle, a clear sign of vulnerability then zooming forward to introduce "Popeye" Doyle, an NYPD cop, played by Gene Hackman, whose body language suggests he is very hardboiled. In the same shot, giving this scene a very documentary realist style, we follow Doyle walking until we're cut to another angle now looking at Hackman from the right hand side as he walks past another image of vulnerability, a mother pushing her a buggy. By now it is clearly established to be winter through the characters costume and setting, the trees in Brooklyn are empty and all actors are wearing winter coats. By this point the scene has consisted of long shots with just one cut, and judging from the previous uneventful scenes of the movie the audience are likely to feel calm and secure that nothing dramatic is about to happen. The viewer's security, built by Friedman, is then shattered when a gunshot from nowhere hits the mother with the pram. ...read more.

This next shot is a classical example of suspense; similar to the roof, as Doyle arrives on the platform he is unaware of the sniper's whereabouts. The audience is left intrigued and on the edge of their seat in anticipation of where the killer might be. The camera then pans across the opposite platform as we're looking through the eyes of Doyle searching for his man. First it swipes across to an old women and children, then to a man who is almost identical to the killer but not, then it swipes across to another man, but then pans back to a pillar where we can see the sniper hiding behind. Doyle pulls out his gun despite the children around, showing his obsession and determination with catching this man. His facial expression is very intense, but timed to the last second; a train crosses into frame blocking Doyle's aim. By this point Doyle's body language suggests he is extremely frustrated, he is bouncing up and down in rage. His deep breathes pushing out long gusts of steam, also establishing the winter weather this was taking place in. "Stop him" he screams, but to no avail. A point of view shot from the perspective of the El train driver is now given to us, looking onward to the perspective of the tracks signifying the beginning of the train part of this chase. ...read more.

Hackman catches up to the killer at the next station but the train does not stop. Doyle is now furious and has an emotional outburst of frustration; we feel what he feels at this point. The pursuit continues untill the train, under no control, crashes into another train. This crash was cleverly filmed pulling away from the train and later put in reverse. The killer, now aware he has nowhere to run, has to leave the train. Doyle catches up to him and chases him to until they reach a staircase. Doyle is clearly now fatigued as his body language suggests, he leans on the hand rail at the bottom of the stairs as the killer stands at the top. They stare at eachother; Doyle with a look of content and the unnamed assasin with a look of apprehension. The scene has reached it's climax, and the tension is at an all time high. The audience now knows that their about to be relieved. The killer then turns away as Doyle controversially shoots him in the back. This scene doesn't just show us the typical good guy vs bad guy scenario but gives us something more controversial. Doyle being a hero we can relate to with actual emotions and weaknesses. This makes the audience form a bond with the character not only because they wish for good to prevail but because they see themselves in Popeye Doyle. ...read more.