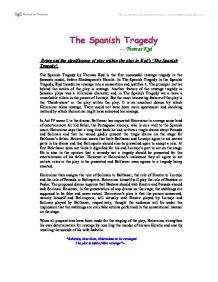 Thomas Kyd - Bring out the significance of play within the play in Kyd's 'The Spanish Tragedy'.

Heironimo then assigns the role of Soliman to Balthazar, the role of Erastro to Lorenjo and the role of Persada to Belimperia. Heironimo himself will play the role of Bashaw or Pasha. The proposed drama requires that Bashaw should stab Erastro and Persada should stab Soliman. However, in the presentation of any drama on the stage, the stabbings are supposed to be fake and never actual. Heironimo's plan is that the person concerned, namely himself and Bel-imperia, will actually stab Erastro played by Lorenjo and Soliman played by Balthazar, respectively, thought the audience will be under the impression that the stabbings are only fake actions performed in the conventional manner on the stage. When all preparations have been made for the staging of the play, Heironimo strengthen his own determination for revenge by recalling the murder of his son Horatio and also by recalling the suicide of his wife Isabella. ...read more.

There is plenty of irony in the scene in which Heironimo presents his dramatic performance on the stage. The King, the Viceroy, the Duke and others are all under the impression that the dramatic performance is meant to entertain them. But we know that Heironimo's real intention is to avenge his son's murder. In 'The Spanish Tragedy', the climax of terror is reached towards the end of the play when we witness 'the play within the play'. Several murders are committed on the stage before the full view of the audience. Here we have true massacre of human beings, carried out according to plan. In 'the play within the play' horrors are piled on horrors. According to the critics, such blood-curdling scene could not have failed to hold the attention of the Elizabethan audience. This 'play within the play' with an interesting story and so many exciting situations make us spell-bound. @ Ferdous Nigar Hossain ...read more.