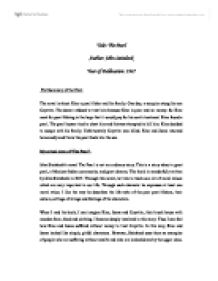 Title: The Pearl Author: John Steinbeck Year of Publication: 1947 Plot Summary of the Pearl The novel is about Kino a pearl fisher and his family. One day, a scorpion stung his son Coyotito. The doctor refused to treat him because Kino is poor and no money. So Kino went for pearl fishing in the hope that it would pay for his son's treatment. Kino found a pearl. The pearl buyers tried to cheat him and thieves attempted to kill him. Kino decided to escape with his family. Unfortunately Coyotito was killed. Kino and Juana returned home sadly and threw the pearl back into the sea. My critical view of "The Pearl". John Steinbeck's novel The Pearl is not an ordinary story. This is a story about a great pearl, a Mexican-Indian community, and great dreams. This book is wonderfully written by John Steinbeck in 1947. Through this novel, he tries to teach us a lot of moral values which are very important in our life. Through each character he expresses at least one moral value. I like the way he describes the life style of the poor pearl fishers, their culture, settings of village and feelings of the characters. ...read more.

Analysis of my critical review When I analyze my critical review on "The Pearl", I think it is based on authorial criticism. From my understanding of authorial criticism is the kind of critic that produces the effect of authorial individuality and effaces all the factors which contribute to the intelligibility of meaning. Directly or indirectly the author is given very much emphasis at the centre of a text's meaning. In contrast the techniques of writing which manipulate the way reader's respond to the text is ignored. So in my critical review on "The Pearl" I did the same. I give more emphasis for the author. So my critical review was based on how the author describes the characters, plot, settings and feelings. And I never mentioned about how is the author's techniques of writing, the language elements, genres, the similes, gestures, idioms that he used and so on. This can be proofed in my critical review which has this line "I like the way he describes the life style of the poor pearl fishers, culture, setting and their feelings". Dugal Williamson posits four overlapping strategies of authorial criticism. I think I have to follow the first and third strategies. ...read more.

The reader also says there are sentences would stick to us like gum to the bottom of our shoe. So this indicates to me the language, genres and literacy devices that used by Steinbeck in his technique of writings. Essay I have always admired the beauty of pearl, but never known much about it. After reading the novel "Pearl" by Steinbeck, I realized the pearl is very great and valuable. It gives beauty and prestige for the people who own it. However this pearl also can change people to be greedy and selfish. This is clearly expressed by John Steinbeck in his novel "Pearl". In addition, after reading the wonderful novel "Pearl", my interest to know about the pearl increased. Thus, I chose the "pearl" as my key word to look for information on internet and I found so many interesting articles about pearl. However there are two articles which interested me very much. There are the history of pearl and "American Pearls". It is very interesting to read the history of pearl. It gives me wonderful education and knowledge about the cultured pearl. Many thousands years ago, long before written history, pearl probably found by the humans while searching the seashore for food. Throughout history, the pearl with its warm inner glow and shimmering iridescences, has been one of the most highly prized and sought-after gems. ...read more.