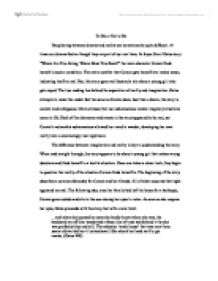 To Be or Not to Be Deciphering between dreams and reality can sometimes be quite difficult. At times our dreams feel as though they are part of our real lives. In Joyce Carol Oates story "Where Are You Going, Where Have You Been?" the main character Connie finds herself in such a condition. The entire conflict that Connie gets herself into makes sense, indicating itself as real. But, this story goes well beyond a tale about a young girl who gets raped. The true reading lies behind the separation of reality and imagination. Oates attempts to make the reader feel the same as Connie does. Just like a dream, the story is unclear and ambiguous. Oates stresses that our subconscious makes imaginary situations come to life. Each of the characters and events in the story appeared to be real, yet Connie's vulnerable subconscious allowed her mind to wander, developing her own reality into a convincingly real nightmare. The difference between imagination and reality is key to understanding the story. When read straight through, the story appears to be about a young girl that makes wrong decisions and finds herself in a hostile situation. ...read more.

Oates portrays Arnold's name to be read as "A Friend." His confident expression and image towards people illustrates his friendly side. In addition to friend, Oates also allows Arnolds name to be interpreted as "A Fiend." With his rugged looks and sly personality, words like brute and cruel fit him well. Though the slight difference in spelling is confusing, they have completely opposite meanings. The deceptive name is not the only part of Arnold that is manipulative. Arnold introduces himself by saying, "I wanta introduce myself, I'm Arnold Friend and that's my real name and I'm gonna be your friend, honey, and inside the car's Ellie Oscar, he's kinda shy." (Oates 370) He uses his name as a tool to trick the unwary. His friendliness is only noticeable on a harsh and demanding level. He uses words like "honey" and "sweetie" to make everything he says sound nice. But, Arnold only gives the impression of being demanding with phrases like, "Don'tcha know it's Sunday all day and honey, no matter who you were with last night today you're with Arnold Friend and don't you forget!" (Oates 372) ...read more.

that she could do nothing put listen to it - the telephone was clammy and very heavy and her fingers groped down to the dial but were too weak to touch it. (Oates 376) Simple actions sometimes become impossible in our own dreams. No one knows why it happens, but everyone has experienced a dream where something so trivial and automatic becomes nearly impossible. The dreamy situation is brought to life with all of these occurrences. Dreams always seem real when we are actively engaged in them. The transition between reality and imagination is nearly impossible to identify. Connie unconsciously fell asleep and drifted off into a dream. Her situation appeared to be real at first, but rapidly transformed as the story proceeded. The characters present were brought to life by her imagination, both parts of her that she was unstable about. Some of her actions were only unachievable because her subconscious was preventing her from completing them. Her mind had developed images of characters. These characters knew everything Connie did, because she had created them. The weaknesses in her subconscious were acted upon and everything fell into place, making her dream feel so real. Her reality became a dream, and her dream became a nightmare. ...read more.