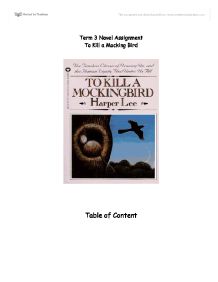 To Kill a Mocking Bird

Term 3 Novel Assignment To Kill a Mocking Bird Table of Content Inside this Book report. 1. Book Review worksheet Page 1 2. Book Review Page 2 3. Major Character list Page 3 4. Character Sketch Page 4 5. Plot Diagram Page 5 6. Answering questions Page 6 Page 2 Book Review This book is called To Kill a Mockingbird which is written by Harper Lee. The setting of the novel is 1933-1935 and it happens in a fictional town of Maycomb, Alabama. Scout Finch lives with her brother, Jem, and their father, Atticus, in the Alabama town of Maycomb. Maycomb is suffering through the Great Depression, but Atticus is a good lawyer and the Finch family is reasonably well off in comparison to the rest of society. One summer, Jem and Scout was friend with a boy named Dill, who has come to live in their neighborhood for the summer, and the three acts out stories together. ...read more.

Atticus agrees to take his case. Mrs. Henry Lafayette Dubose A mean, very old woman who lives near the Finches Nathan Radley - Boo's older brother. Try to cut contact with Boo and the Finch kids. Heck Tate Maycomb County's trusty sheriff, who is on the whole an honest man. Mr. Underwood - The publisher of Macomb's newspaper. Mr. Underwood respects Atticus and proves his ally. Mr. Adolphus Raymond A white man who marry black women and try to pretend that he is drunk so the town does not know what he is doing . Mr. Walter Cunningham Son of the other Walter, who attends first grade with Scout. Page 4 Character Sketch The major character that I am going to be described is Scout Finch. In this story Scout is a very unusual little girl. She is unusually intelligent because she learns to read before beginning school , and she like to fight with boys and have no fear about it. ...read more.

2. When Boo Radley save the kid from Bob Ewell and Boo finally step out of the house for the first time in the novel. D) The incident that I have identify in #5 as the climax is when Atticus's defend Tom Robinson, the jury finds Tom Robinson guilty. The verdict forces Scout and Jem to confront the fact that the morals Atticus has taught them cannot always be reconciled with the reality of the world and the evils of human nature. I think this is the climax because I believe that this is the most exiting part of the novel and then the story goes down after this incident. E) I think that this book has a satisfy conclusion even though Tom Robinson was killed . Every in the novel had a good ending , finally the heroes show up to save people like Boo Radley. F) I think that the theme of the book is the coexistence of good and evil; the importance of human nature and how human are being rascist. G) In my opinion I think this book is great I would recommend to other reader beside the fact that it's long. ...read more.