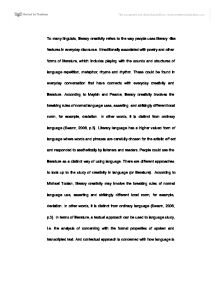 To many linguists, literary creativity refers to the way people uses literary-like features in everyday discourse. It traditionally associated with poetry and other forms of literature, which includes playing with the sounds and structures of language rep

Terry Eagleton once pointed out that in the 17th and 18th Century 'literature' meant 'polite writing' and essays, sermons, philosophy and history have all been included in the English literary canon. He rejected that there is something about true literature would evoke a particular quality of aesthetic response in the reader. He argued that every text can be read poetically. And there is no common factor nor intrinsic essence to 'literature' but should take account into social and ideological factors in order to understand the role of literature in society. The literary canon has been 'fashioned by particular people for particular reasons at a particular time'(Eagleton, 1983,p.11). Furthermore, in Eagleton's point of view, what counts as literature is ideological since it takes within 'an often invisible network of value categories', connected, together with particular 'modes of feeling, valuing, perceiving and believing', to the power structure and power relations of the society in which we live (Janet Maybin & Michael Pearce,p.12). It relates closely to the needs of the times and priorities of powerful social groups within society and embodies social values and helps to disseminate them. For instance, the polite manners and taste in literature helped binding the middle and upper classes after a period of civil war in 18th century. To sum up, the question of what counts as literature, in Eagleton's point of view, depends on how the society values the works of writing based on particular social and historical reasons. More directly, what counts as literature is in fact an ideological decision (Eagleton 1983). In terms of cognitive approach, it focuses on the mental processes of readers, but not writers. ...read more.

Last but not the least, the inherency approach is comparatively the most convincing approach. It helps measuring the literariness of the text systematically. Though someone may say it restrained from poetic functions and resulted in the non-poetry work is hard to be included as literature. However, this approach is undoubtedly the most objective approach and more consistent results can be generated. In order to analyze literary creativity effectively, cognitive and inherency approch should both be used among the information that we had about literature at this moment. Since there are lots of varieties in these three approaches and lead to the problem that it is hard to list out some common factors to analyze and what count as literature is a ever-changing concept. People should look forward to a new and better approach which could replace or improve the above-metioned approaches in the future. Appendix 1 Happiness is a River Bank by Pauline Oliver Happiness is a river bank Far from the maddening crowd A place to sit cross-legged, gazing far Perchance to think out loud Sailboats harness wind's mighty power Seagulls' aerial ballet overhead Water sparkling blue, light's dainty dance Thoughts of poems still unread To reach the other shore it seems No more than a step or two Yet in truth a barrier exists This flowing 'Creeksea' river blue Happiness is a river bank Temptation - the opposite shore When you find that place called happiness What's not to want but more Appendix 2 A clothing advertisement from Moussy (F/W 2009) Appendix 3 Excerpt from 'Auguries of Innocence' byWilliam Blake(1757-1872) To see a world in a grain of sand And a heaven in a wild flower, Hold infinity in the palm of your hand And eternity in an hour. ...read more.