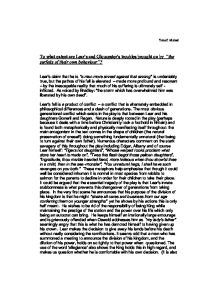 To what extent are Lear's and Gloucester's troubles brought on by &quot;the surfeits of their own behaviour&quot;?

Yousif Ahmad To what extent are Lear's and Gloucester's troubles brought on by "the surfeits of their own behaviour"? Lear's claim that he is "a man more sinned against that sinning" is undeniably true, but the pathos of his fall is elevated - made more profound and resonant - by the inescapable reality that much of his suffering is ultimately self-inflicted. As voiced by Bradley: "the storm which has overwhelmed him was liberated by his own deed". Lear's fall is a product of conflict - a conflict that is alternately embedded in philosophical differences and a clash of generations. The most obvious generational conflict which exists in the play is that between Lear and his daughters Goneril and Regan. Nature is deeply rooted in the play (perhaps because it deals with a time before Christianity took a foothold in Britain) and is found both metaphorically and physically manifesting itself throughout: the main antagonism in the text comes in the shape of children (the natural preservation of oneself) doing something fundamentally unnatural (that being to turn against their own father). Numerous characters comment on the stark savagery of this throughout the play including Edgar, Albany and of course Lear himself: "Tigers not daughters", "Whose warped looks proclaim what store her heart is made on", "Twas this flesh begot those pelican daughters", "Ingratitude, thou ...read more.

Cordelia decides to "love and be silent" and in doing so hurts her father, stings him, cracks his heart through her refusal to put her feelings into words; by virtue of her position as Lear's favourite, he surely expected hers to be the most loving, generous and praising speech. An objective witness - audience and readers, for example - might say he was wrong, mistaken, cruel to reject Cordelia after she offered him no flattery. As Kent comments his "power to flattery bows"; but Lear is a man in decline, acknowledging his weakness and descent from power - and he finds that the daughter he loved most, the daughter he was depending on for dotage and utter affection, is unwilling to indulge him. Lear's pride - another of his fallibilities - makes it expected for him to cast out Kent when he opposes the King. Goneril and Regan's ingratiating appeasement is illusionary and vacant; but Kent and Cordelia's sincerity is brutal for Lear to face - thought morally purer, it provides no sympathy for Lear, a man now as much in decline as when he is later wandering the fields. Cordelia and Kent would rather be blunt than false; they would rather hurt Lear than lie to him. ...read more.

If Lear's folly is engendered by his waning mind then Gloucester's is caused simply by his inability to see the true nature of his sons until its too late - which of course the plucking out of his eyes by Cornwall because of Edmunds treachery is a cruel and ironic metaphor of. The fact that Edgar does not confront Gloucester about Edmund's lies suggests that he is willing to accept his father's decree because he believes he deserves the castigation and judgement. By mortifying his appearance Edgar perhaps betrays deep self doubt, which would explain why he accepts events as he does. This is doubtless a scenario familiar to many modern families, in which children go to great lengths to satiate the hopes their parents have for them. This is also attributable to Lear's daughters - if they have received no attention or support from Lear, then we can assume they in turn have no desire to support their father and owe him no devotion. The generational clashes - originating through Lear's and Gloucester's twin surfeits and superfluities - in King Lear demonstrate that familial conflicts are timeless (but so are familial joys, as evidenced by the reconciliation between Lear and Cordelia). ...read more.